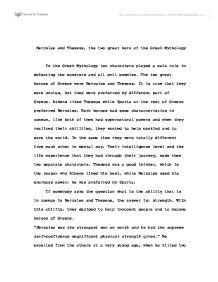 Hercules and Theseus, the two great hero's of the Greek Mythology.

Hercules and Theseus, the two great hero of the Greek Mythology In the Greek Mythology two characters played a main role in defeating the monsters and all evil enemies. The two great heroes of Greece were Hercules and Theseus. It is true that they were uncles, but they were preferred by different part of Greece. Athens liked Theseus while Sparta or the rest of Greece preferred Hercules. Both heroes had some characteristics in common, like both of them had supernatural powers and when they realized their abilities, they wanted to help mankind and to save the world. In the same time they were totally different from each other in mental way. Their intelligence level and the life experience that they had through their journey, made them two separate characters. Theseus was a good thinker, which is the reason why Athens liked him best, while Hercules used his enormous power; he was preferred by Sparta. ...read more.

Hercules was renamed after his strength and he was called a hero when he defeated the Minyans. Of course they had some different characteristics as every people do. But these differences were important. Their intelligence level was like sky and ground, and their life experience differed, too. Hercules's "Intelligence did not figure largely in anything he did and was often conspicuously absent". Theseus was at a higher level of his mental capabilities, because he wanted a people's government where all would be equal. About Hercules we get a clear picture from the story, that what kind a man was he: "His intellect was not strong. His emotions were." Even if his feelings were strong, he always blamed himself for the way he acted. He usually acted first and then thought about the consequences. This characteristic is proven by the scene from the funeral, where Hercules gets drunk and then he realized his fault and to make a recompense he bring back Admetus's wife from the underworld. ...read more.

Another reason why Athenians like him best, because he never had to make labors like Hercules did many-many times. Athenians didn't liked Hercules, because he was wild. The rest of Greece preferred wildness and the strength. "But Hercules embodied what the rest of Greece most valued. His qualities were those the Greeks in general honored and admired". In Greek tradition, the boys are taken at very young age for military practices and they are educated to kill. As Hercules was strong and able to kill, Spartans considered him as one of them. In my opinion Theseus was a better hero than Hercules. I admire Hercules for his enormous powers, but sometimes he was out of control of his strength and killed people that he shouldn't have killed. I think that if we didn't think ahead before we act something always going to end with a disaster. That's why I like Theseus. He is a carefully thought out person, he never had to make up labors, and he also treated people equally and cared about their feelings. 2 ...read more.