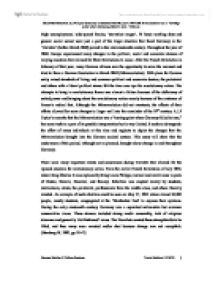 High unemployment, wide-spread famine, 'starvation wages', 16 hours working days and general social unrest were just a part of the tragic situation that faced Germany in the 'Vormrz' (before March 1848) period in the mid-nineteenth century. Throughout

High unemployment, wide-spread famine, 'starvation wages', 16 hours working days and general social unrest were just a part of the tragic situation that faced Germany in the 'Vorm�rz' (before March 1848) period in the mid-nineteenth century. Throughout the year of 1848, Europe experienced many changes in the political, social and economic stances of varying countries that allowed for State Revolutions to occur. After the French Revolution in February of that year, many German citizens saw the opportunity to seize the moment and tried to force a German Revolution in March 1848 (M�rzrevolution). With pleas for German unity, raised standards of living, and common political and economic desires, the proletariat and others with a liberal political stance felt the time was ripe for revolutionary action. The attempts to bring in revolutionary forces was almost a failure because of the deficiency of united power and bringing about the revolutionary action merely because of the existence of France's radical feat. Although the M�rzrevolution did not eventuate, the effects of their efforts allowed for some changes to linger well into the remainder of the 19th century. A.J.P Taylor's remarks that the M�rzrevolution was a "turning-point where Germany failed to turn," has some truth to a part of its possible interpretation but is very limited. It seeks to downgrade the effort of many individuals at this time and neglects to depict the changes that the M�rzrevolution brought into the German societal system. ...read more.

Two shots were fired by the troops, by accident, but the damage was done. The Prussians believed that the king had lied and that began protesting. Many people died after the king's soldiers had finished 'moving the crowd away.' (Siemann W, 1998, pg 64) In an attempt to re-unify himself with his people, William IV paraded through the streets of Berlin in the company of some ministers, generals and members of his family, all wearing black, red and golden sashes on March 21 (Fulbrook M, 2004, pg 118). These colours were from the flag of the medieval German Reich and symbolise unity (Siemann W, 1998, pg 66). With these ease of the former liberal victories across Germany, a self-appointed 'pre-Parliament met in Frankfurt's St. Paul's Church (Fulbrook M, 2004, pg 118). Liberals from all over Germany converged to make vital decisions on how they could create a National Assembly for all of Germany. After much deliberation, the varying German states agreed that a National Assembly could be formed and on May 18th 1848 they conducted their first meeting (Fulbrook M, 2004, pg 118). Many of the first members of parliament were professors and lawyers with only four handicraftsmen and one solitary peasant (Fulbrook M, 2004, pg 119). Although many of the members had differing views, some decisions were able to be formed. Firstly some economic policies were agreed upon and the introduction of free trade between states and neighbouring countries was also supported (Fulbrook M, 2004, pg 119). ...read more.

The efforts of the revolutionaries also allowed for "[f]eudal social relations on the land, (to be) effectively abolished all over Germany by 1850..." (Fulbrook M, 2004, pg 121) Peasants and artisans were, therefore, able to complete their work without fear of conflict and general upset in their agrarian system (Siemann W, 1998, pg 132). Further, the "...economic life continued in a liberal mode..." (Fulbrook M, 2004, pg 121) with help from the now constitutionally run Prussian government and others. This allowed for economic stability and even a continuance towards a brighter and healthier economy. (Sperber J, 2004, pg 253) Thus the actions of the revolutionaries enabled Germany as a whole to instigate change, and therefore their efforts did not go unrewarded. In conclusion, the German 'Revolution' of 1848/49 was a fight for change and essentially for survival of not only their views but their well-being as citizens. From minor protests in the early nineteenth century to the political and physical slaughtering of those in Berlin on March 18th/19th, the revolutionaries gained support that required both action and sadly reaction. Although a political assembly was formed in Frankfurt with many decisions made, lack of unity and power kept the liberalists from stabilising their political ideals into the German societal system. The national assembly was dissolved and the 'Revolution' essentially failed but only in terms of their main ideal for German unity in 1849, as the conservatives reacted and regained power. However, the actions of the revolutionaries were not futile. Some change was implemented and some actions of the 1848 revolutionaries remain today with the current German Flag as one example. ...read more.