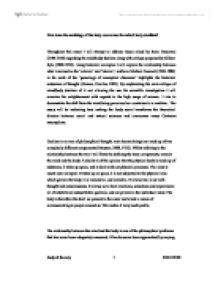 How does the sociology of the body overcome the mind/ body dualism?

How does the sociology of the body overcome the mind/ body dualism? Throughout this essay I will attempt to address issues raised by Rene Descartes (1596-1650) regarding the mind/body dualism along with critique proposed by Gilbert Ryle (1900-1976). Using historical examples I will explore the relationship between what is termed as the 'exterior' and 'interior', and how Michael Foucault (1926-1984) in his work of the 'genealogy of conceptual discourse' highlights the historical endurance of thought. (Barnes, Caroline 2005). By emphasising the main critique of mind/body dualism of it not allowing the use for scientific investigation I will examine the enlightenment with regards to the high usage of science. I aim to demonstrate the shift from the mind being perceived as a container to a machine. The essay will be indicating how making the body social transforms the theoretical division between social and natural sciences and overcomes many Cartesian assumptions. Dualism is an area of philosophical thought, were human beings are made up of two completely different components (Maunter, 2000, P152). Whilst referring to the relationship between the two I will firstly be defining the basic components, namely the mind and the body. A dualist is of the opinion that the physical body is made up of substance, it takes up space, and it deals with our physical processes. ...read more.

During the 18th century the changing of the scientific atmosphere led to a decline of Cartesian philosophy and was replaced by those who had an impact on the Enlightenment. Locke emphasises the irrelevance of Descartes famous assertion of humans being based on clockwork, therefore being unable to play a part in the course of human existence. When discussing free-will he does not try to disprove Descartes findings, but adds to them to a more acceptable and reasonable level. The enlightenment was not only in conflict with faith, but introduced ideas of a rationalist faith, eliminating all that was perceived as irrational. However enlightenment is different from rationalism as it provides a framework for society. However as well as being an ideological movement it was also an intellectual movement which captured the imagination of society as a whole. "Indeed it may be helpful to see the enlightenment as a point in history where the secular intelligentsia emerged a relatively independent social force" (Porter, R. The Enlightenment (Studies in European History), p.10) When Porter talks about people as being 'social forces' , it is meant that they were influencing society through their teachings and ideas. Individuals through the enlightenment were seeking an explanation for human existence. Many historical theories attempt to build relationships with regards to the face and soul. Prior to the enlightenment Aristotle draws on pseudo-science of physiognomies. ...read more.

(Crossley, N 2001). With just a few examples recounted above I hope I have been able to show not only that the study of the body and its practices are important in deconstructing old theoretical oppositions and dualisms inherited from Cartesian philosophy, but also that they can open up new fields of research and conceptualization. An example which demonstrates the proof that both mind/soul interact with the body is the fact that some mental things have effects on some physical things and vice versa. For example consumption of large amounts of alcohol can cause a hallucination which is the physical affecting the mental, and an example for how the mental affects the physical is blushing when we are embarrassed. Books Crossley, N. (2001). The social body: habit, identity and desire. Sage publications. Porter, R. (1990). The Enlightenment (Studies in European History) London:Routledge Ryle, G. (1949). The Concept of Mind London: Hutchinson. Warburton, N. (1999). Philosophy the Basics third edition London: Routledge Weber, M. (1968/1921). Economy and Society. Translated and edited by Guenther Roth and Claus Whitish. New York: Bedminster Press. Dictionaries Brookes, I. (2002). English Dictionary. HarperCollins: Glasgow. Garrod J, Lawson T. (2001). Dictionary of Sociology. Fitzroy Dearborn Publishers. Maunter, T (editor) (2000). The Penguin Dictionary of Philosophy London: Penguin Websites http://www.what-means.com/encyclopedia/Physiognomy (Prior Analytics (2.27) Trans. A. J. Jenkinson) Lecture Notes: The face, discourse and inferences of the soul. ?? ?? ?? ?? Body & Society 1 W03120790 ...read more.