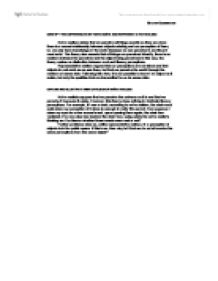 IDENTIFY TWO DIFFERENCES BETWEEN NA�VE AND REPRESENTATIVE REALISM Na�ve realism states that we perceive all things exactly as they are since there is a causal relationship between objects existing and our perception of them, i.e. we only have knowledge of the world because we can perceive it, and thus it must exist. The theory also asserts that all things are perceived directly, there is no medium between the perceiver and the object being perceived; in this way, the theory makes no distinction between real and illusory perceptions. Representative realism argues that our perceptions are not direct and that objects do not exist as we see them, but that we perceive the world through the medium of sense data. Following this view, it is not possible to know the object as it exists, but only the qualities that are transmitted to us via sense data. EXPLAIN AND ILLUSTRATE ONE CRITICISM OF NA�VE REALISM Na�ve realists suppose that we perceive the universe as it is and that we perceive it because it exists. However, this theory does nothing to vindicate illusory perceptions. For example, if I see a chair, according to na�ve realism, the chair must exist since my perception of it alone is enough to verify this as fact. ...read more.

However, at night, under the hues of yellow city streetlights, the grass may appear brown. In this example, the changed conditions (the colour of light) have changed the sense data received from the grass. Why is it then, that although the grass may appear brown under yellow streetlights, we still concede that it is indeed green, contradicting the sense data we receive from it? Representative realism inevitably leads us to believe that the only things of whose existence we can be sure are sense data. Representative realism does very well in resolving the problems of na�ve realism, but does very little to affirm itself as an absolutely viable basis for our perceptions. This is because it does not still does not disprove notions such as Descartes' malignant demon (the idea that we are all victims of a mass illusion), nor does it provide us with a means to accept that beyond any doubt whatever that sense data is a foolproof means of obtaining information from, and perfect image of, the world. ASSESS EMPIRICISM Empiricists believe, unlike the rationalists, that the main source of our knowledge is derived from our senses. It argues that there are no innate ideas and that all things that we know, we know because we have experienced them through our senses. ...read more.

In Descartes' Meditations, he poses the possibility that the each and every perception and piece of knowledge is part of a universal deception, even if this is not so, there are times when our own senses deceive us, such as when we believe we hear someone call our name in a noisy environment. If we take the traditional view that knowledge is justified true belief, then, since the very possibility that we are being deceived exists, we cannot accept that all knowledge is obtained from experience. This problem is worsened, as with sense data, in the fact that it is impossible to ensure that our senses give an accurate image of the world as it exists in reality. Empiricism seems to do nothing more than explain what experiences are and how they contribute to our knowledge, but we cannot cite experiences as the sole basis of knowledge since (as said earlier) it can be proven that knowledge does not encompass all things. It is imperative that knowledge does necessitate all things since if there is even the minutest detail that could refute knowledge; the entire concept is flawed, much like Descartes' concept of doubt and knowledge. One foreseeable way in which this is with the introduction of an absolute and flawless knowledge, which, no doubt, Descartes would say rests in God. STEFAN CODRINGTON ...read more.