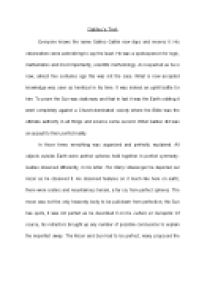 In arguing for the Copernican system Galileo demonstrated he was well equipped in balancing church and science.

﻿Galileo?s Trek Everyone knows the name Galileo Galilei now days and reveres it. His observations were astonishing to say the least. He was a spokesperson for logic, mathematics and most importantly, scientific methodology. As respected as he is now, almost five centuries ago this was not the case. What is now accepted knowledge was seen as heretical in his time. It was indeed an uphill battle for him. To prove the Sun was stationary and that in fact it was the Earth orbiting it went completely against a Church-dominated society where the Bible was the ultimate authority in all things and science came second. What Galileo did was an assault to their perfect reality. In those times everything was organized and perfectly explained. All objects outside Earth were perfect spheres held together in perfect symmetry. Galileo observed differently, in his letter The Starry Messenger he depicted our moon as he observed it. He observed features on it much like here on earth; there were craters and mountainous terrain, a far cry from perfect spheres. The moon was not the only heavenly body to be pull-down from perfection; the Sun has spots, it was not perfect as he described it on his Letters on Sunspots. ...read more.

Mathematics would require a person to be less free with their philosophical imagination and more procedural, precise. This also would have made the individual think for himself instead of just accepting ancient philosophies matter-of-factly. This would have been seen as highly disrespectful and blasphemous which for the times it meant a threat to their reality. Nature was not just for the philosopher but it could be quantify and explain with mathematics. Sequently, predictions could be issued base on mathematical observations of nature such as the law of falling objects discussed in the last book written in his life; The discourse of The Two New Sciences. Galileo discussed in the Two New Sciences that the path of any projectile is Parabolic or curved not straight. Galileo experimented with acceleration and proposed that all objects (in a vacuum) when dropped from the same high at the same time fall at the same rate. Additionally, he observed uniform acceleration in falling objects; that is to say a falling object increases speed at a predictable time rate. He further stated that in absence of friction a rolling object can move indefinitely; this was his law of Inertia. In arguing for the Copernican system Galileo demonstrated he was well equipped in balancing church and science. ...read more.

Not to mention, the Earth is made of rock not aether; it can?t possibly move. Finally, it is absolutely ludicrous for this gentleman to disregard common knowledge, all it?s held together ever-the-same, so perfectly in the crystal spheres; perfection need not change. Galileo never actually proved the Earth moved around the Sun, but it did not matter for he had done enough work to extrapolate it did. Much of the anger and fear projected at Galileo had to do with a threat to reality. The Church had to be right at all times for the Bible derived from God and God is perfection. Even though, Aristotelian science came from Aristotle and not the Bible, it did not matter. The Aristotelian view had been with the Church for so long that they had become one in the same. Galileo was fighting an uphill battle, but armed with the tools of the new science, anyone could test his results for themselves. I think it was this ability to see for one?s self, to follow the mathematics to Galileo?s own conclusions that eventually did away with the Church?s grip over science. I think Galileo?s triumph over the Church marked modern science?s first main victory for the mind of man. ...read more.