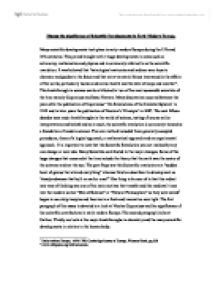 Discuss the significance of scientific developments in Early Modern Europe

Discuss the significance of Scientific Developments in Early Modern Europe. Many scientific developments took place in early modern Europe during the 15th and 16th centuries. This period brought with it huge developments in areas such as astronomy, mathematics and physics and is commonly referred to as the scientific revolution. It was believed that "astrological anatomies and zodiacs were keys to character and guides to the future and that extra-terrestrial forces intervened in the affairs of the world, particularly human and animal health and the state of crops and weather". This breakthrough in science can be attributed to two of the most successful scientists of the time namely Copernicus and Isaac Newton. Many discoveries occurred between the years after the publication of Copernicus' 'On Revolutions of the Celestial Spheres' in 1543 and in later years the publication of Newton's 'Principia' in 1687. The next fifteen decades seen major breakthroughs in the world of science, testing of course earlier interpretations and beliefs and as a result, the scientific revolution is commonly viewed as a foundation of modern science. The new method included three generally accepted procedures, those of a logical approach, a mathematical approach and an experimental approach. It is important to note that the Scientific Revolution was not marked by any one change or new idea. Many Scientists contributed to the major changes. ...read more.

This piece of work upheld the Copernican system and is said to be one of the major turning points in scientific thought. Galileo also demonstrated his famous laws of motion by dropping b***s of varying weight off the leaning tower of Pisa, he found that the earth was in perpetual rotation and that the b***s of varying weights will pick up speed at the same rate as they fall, that their speed is not determined by their mass. In the field of chemistry new discoveries and breakthroughs were also very prominent with Robert Boyle being largely regarded today as the first modern chemist7. Boyle was an alchemist and believed in the transmutation of metals and conducted experiments in the hope of achieving this. But this scientific practice has been around for approximately 2500 years8. Robert Boyle's list of extraordinary achievements reflects his radical way of thinking that was a key role in the scientific revolution. For example he enunciated Boyles Law, stating that the product of the volume and pressure of a fixed quantity of an ideal gas is constant given temperature. He carried out extensive experimentation on the role of air in the propagation of sound, the expansive force of freezing water, on specific gravities, refractive powers, crystals, electricity, combustion, respiration and physiology. Robert Boyle contributed greatly to the scientific developments in early modern Europe. ...read more.

Due to this intensive experimentation he stated that blood was pumped around the body by the heart before returning to the heart and being re-circulated within a closed system.13. The scientific developments of early modern Europe were an era of revolutionary thought. The work of these scientists, natural philosophers, men of science took great time, patience and innovative skills. These people contradicted the unquestionable theories of the ancient Greek philosophers and deemed them to be nonsense and impractical. The huge developments of this era are of great significance and have led to the diffusion of learning and education, thus calling the period the century of genius. It is true to say that the scientific developments of earl modern Europe were of significant importance as without these men and their revolutionary new way of thinking the world today would not be as scientifically, technically and medically advanced. People such as Galileo, Copernicus and Vesalius have greatly enhanced the contemporary understanding of the richness and the complexity of the world around them. 1 Early modern Europe, 1450-1789, Cambridge history of Europe, Wiesner-Hank, pg 328 2 www.wikipedia.org/wiki/scientists 3 http://www.blupete.com/Literature/Biographies/Science/Copernicus.htm 4 A History of Modern Europe, John Merriman, W.W Norton and Company, 1996, Chapter * pg 333 5 http://www.blupete.com/Literature/Biographies/Science/Galileo.htm 6 A History Of Modern Europe, John Merriman, W. W. Norton and Company, 1996, Chapter 8, pg 340 7http://en.wikipedia.org/wiki/Robert_Boyle 8 http://en.wikipedia.org/wiki/Alchemy 9 http://scienceworld.wolfram.com/biography/Vesalius.html 10 http://scienceworld.wolfram.com/biography/Vesalius.html 11 en.wikipedia.org/wiki/Vesalius 12 http://scienceworld.wolfram.com/biography/Harvey.html 13 Early Modern Rurope, 1450-1789, Merry E Wiesner-Hanks, chapter 8 pg 268 ?? ?? ?? ?? ...read more.