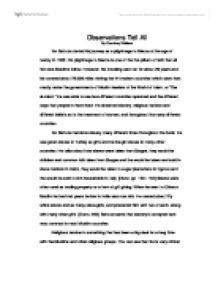 Observations Tell All By Courtney Wallace Ibn Battuta started his journey as a pilgrimage to Mecca at the age of twenty in 1325. His pilgrimage to Mecca is one of the five pillars of faith that all first-rate Muslims follow. However, his traveling went on for about 29 years and he covered about 75,000 miles visiting the 44 modern countries which were then mostly under the governments of Muslim leaders of the World of Islam, or "Dar al-Islam." He was able to see how different countries operated and the different ways that people in them lived. He observed slavery, religious tension and different beliefs as to the treatment of women, and throughout the many different countries. Ibn Battuta mentions slavery many different times throughout the book. He was given slaves in Turkey as gifts and he bought slaves in many other countries. He talks about how slaves were taken from Steppe, they would be children and common folk taken from Steppe and the would be ...read more.

Ibn just dislikes the beliefs and conduct of worship that the Christians have so he tries to make sure that they are not heard: "It is in the trading city of Kaffa on the north shore of the Black Sea that Ibn Battuta starts to shout the Muslim call to pray in an attempt to drown out the Christian church bells" [Dunn, p. 164]. Ibn also has a very strong religious affiliation with the Sunni Muslims so he doesn't even associate with the Shi's Muslims, Ibn Battuta was a strict Sunni Muslim and he makes it very clear that he had little time for Shi'is. At several points in the Rihla he takes cheap shots at their beliefs or recounts disapproving little anecdotes about their obsessive and misguided observances. He did not mix much with Shi'i scholars and deliberately avoided visiting certain towns having predominantly Shi'i populations" [Dunn, pp. ...read more.

[Dunn, 235] In Anatolia and Steppe he finds that women are allowed to walk around and not have their faces covered by a veil. He sees this to be an outrage. [Dunn, 143] He is also very critical of women having a high status or being able to interact socially with men. He finds this to be incredibly unacceptable, when he calls Masufa scholar and found his worthy's wife talking to a man that was not her husband, in the court yard, he expressed profound disapproval and the scholar explained to him that men let their wives talk to other men with no suspicion attached and it is all in good conduct. [Dunn, 300] Battuta was able to see many different aspect of how women a re treated in the many different Muslim countries. A lot of the things that Ibn saw and participated in on his journey we great learning experiences and gave us great in sight into the Muslim world. It helped to get rid of many negative images that we might have about Muslims. ...read more.