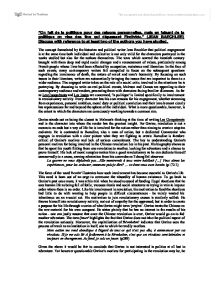 "On fait de la politique pour des raisons personnelles, mais en faisant de la politique on vise des fins qui d�passent l'individu." (JEAN BAECHLER) Discuss with reference to at least two of the authors you have studied. The concept formulated by the historian and political writer Jean Baechler that political engagement is at the same time both individual and collective is not only valid for the characters portrayed in the works studied but also for the authors themselves. The wars which scarred the twentieth century brought with them deep and rapid social changes and a reassessment of values, particularly among French people whose lives had been affected by occupation, resistance and liberation. In the face of such events, many contemporary writers felt compelled to focus on the subsequent questions regarding the imminence of death, the nature of revolt and man's humanity. By focusing on such issues in their literature, writers are automatically bringing the issues that are important to them to a wider audience. The engaged writer takes on the role of a social critic involved in the situations he is portraying. By choosing to write on real political events, Malraux and Camus are appealing to their contemporary audience and readers, presenting them with characters facing familiar dilemmas. As far as Les Conqu�rants and Les Justes are concerned, 'la politique' is limited specifically to involvement in revolutionary activity. Every character has his own reasons for his engagement, whether stemming from experiences, personal ambition, moral duty or political conviction and their involvement clearly has repercussions far and beyond the sphere of the individual. What is more questionable, however, is the extent to which the characters are consciously working towards a common aim. Garine stands out as being the closest to Malraux's thinking at the time of writing Les Conqu�rants and is the character into whom the reader has the greatest insight. For Garine, revolution is not a means to an ends but a way of life: he is involved for the action rather than aiming to create a utopian end-state. ...read more.

Their unity is shown by the fact that they are all members of a organisation whose immediate task is to murder the Grand Duke, whereas in Malraux's novels, the characters do not all share the same political convictions, for example Garine is not a member of the Communist party. Despite the common aim of the terrorists in Les Justes, conflict arises between the characters when their personal convictions regarding the limits of acceptable political activism come into play. The characters' ethics stem from their experiences and values which initially prompted their involvement in revolutionary activity. Stepan's hatred towards the existing ruling order is fuelled by the harsh experiences he went through in prison. The juxtaposition of the images of freedom and prison in the following quotation highlights his belief that freedom should be for everyone, not the reserve of the few. La libert� est un bagne aussi longtemps qu'un seul homme est asservi sur la terre. (Stepan, Act 1, p17) His motivation transcends simple revenge: he wants liberty for everyone at any cost. His bitterness leads him to feel that any means that would lead to destroying the regime are justifiable. He speaks in absolutes. The extremes he is prepared to go to for the cause are highlighted by the incident following Kaliayev's failure to throw the b**b when there were children in the carriage. He is the only character to object to Kaliayev's ethical decision not to throw the b**b with the Duke's niece and nephew in the carriage. Stepan's advocating of the use of violence and even of killing children is prompted by the suffering he went through at the hands of the regime he is set to destroy. However, he never turns his back on the party and obeys, albeit unwillingly, orders not to throw the b**b, whereas in Les Conqu�rants, Hong turns to anarchy after becoming dissatisfied with the organised approach of the party. ...read more.

Equally true is that involvement in politics is bound to have a wide-reaching effect. What varies from character to character is whether they have a common aim as a conscious objective. This is closely connected to the author's own philosophical or political standpoint. It is essential to remember when examining committed literature that the authors are primarily writers and philosophers, rather than politicians. Malraux's particular interest in writing Les Conqu�rants was not to urge people to go and participate in revolution or to give a historical account of the events in China. Through the particular we reach the universal and in this case the wider theme is the exploration of an attempt to conquer the absurdity of human existence. The novel concludes on Garine's ultimate failure to counter the supreme power of nature. None of Malraux's favoured characters participate in revolution with a strong political commitment to an end-state. Malraux's own life was marked by a series of deaths and so the imminence of death features strongly in his writing. Camus was particularly interested in the nature and morality of revolt and hence explores motivation and ethical limits in Les Justes. The fact that his characters are all members of a terrorist organisation committed to ridding Russia of despotism means that they adhere more closely to Baechler's assertion. Belonging to a party automatically gives an individual a sense of working towards a collective aim, as shown by Camus' 'meurtriers d�licats' and the Communist Borodine in Les Conqu�rants. These characters illustrate much more closely Baechler's statement than Garine, who admits he is not interested in the results of his action. The discipline and unity of party members focus them on the collective, as opposed to anarchists whose spontaneity and heroism are associated with individualism. Engaged authors themselves also exemplify Baechler's statement. By using novels and theatre to communicate their ideas, whether political or philosophical, they are targeting a wider audience to provoke thought, if not change, in society. ...read more.