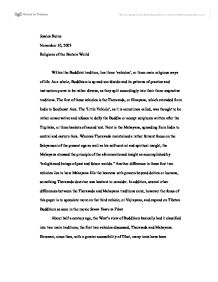 Religions of the Eastern World

Jessica Burns November 10, 2003 Religions of the Eastern World Within the Buddhist tradition, lies three 'vehicles', or three main religious ways of life. As a whole, Buddhism is spread worldwide and its patterns of practice and instruction prove to be rather diverse, as they split accordingly into their three respective traditions. The first of these vehicles is the Theravada, or Hinayana, which extended from India to Southeast Asia. The 'Little Vehicle', as it is sometimes called, was thought to be rather conservative and refuses to deify the Buddha or accept scriptures written after the Tripitaka, or three baskets of sacred text. Next is the Mahayana, spreading from India to central and eastern Asia. Whereas Theravada maintained a rather fervent focus on the Sakyamuni of the present age as well as his self-control and spiritual insight, the Mahayana stressed the principle of the aforementioned insight as accomplished by "enlightened beings of past and future worlds." Another difference in these first two vehicles lies in how Mahayana fills the heavens with powers beyond deities or humans, something Theravada doctrine was hesitant to consider. In addition, several other differences between the Theravada and Mahayana traditions exist, however the focus of this paper is to speculate more on the third vehicle, or Vajrayana, and expand on Tibetan Buddhism as seen in the movie Seven Years in Tibet. ...read more.

The egotistical Heinrich uses his cleverness and cunningness to lose the guards which are to escort him and Peter out of Tibet and shoot them should they try to escape. The two men wind up traveling with a group of followers of the Dalai Lama on their pilgrimage to the holy city, Lhasa. As we have seen in lecture as well as found in the readings, many practitioners of Tibetan Buddhism would take these long journeys in order to visit the holy city, be graced with the presence of the holy leader, the Dalai Lama, and offer him gifts, as well as seek his insight. In 7 Years in Tibet, we see these people dropping to the ground and even kissing it, out of praise and respect for their spiritual leader, and also clapping their hands together, a means of driving away evil spirits. In the movie, the Tibetans believe the foreigners are evil spirits which have come to try to destroy everything they hold sacred. The Dalai Lama, a young boy at the time, seeks out Heinrich in order to learn more about other cultures and civilizations. The Dalai Lama is fascinated with learning and absorbing all he can. The two men become unlikely friends who begin to spend more and more time conversing, with the Dalai Lama trying to take every last thing in. ...read more.

Although the surrender appears shocking and cowardly, the death of innocent Tibetans in a 'war they could not win', as well as a strong belief in non-violence, brings the leader to surrender, in hopes to avoid more bloodshed. In the movie, we constantly see people chanting mantras, or magical hymns which aim to change reality. During this crisis with the Chinese, we see people partaking in these chants even more frequently; even the Dalai Lama is seen chanting on the rooftop of his palace the Potala as he puts all of his trust into his religion to keep his people safe. By this time, Heinrich and the Dalai Lama have established a close friendship and Heinrich is very much concerned about the safety of the Dalai Lama. He tells him he has arranged a means of escape for him and he must flee in order to protect himself. In staying with the tradition of Tibetan Buddhism, the Dalai Lama rejects the offer to flee, as he feels he simply must remain with his people, as their spiritual guide. His complete trust and faith is in his religion and he believes it alone will carry them through unscathed. Although the movie did depict many traditional aspects of Tibetan Buddhism as we have learned in lectures and readings, I feel as though a further endeavor into the Buddhist religion would have made the movie more impacting. ...read more.