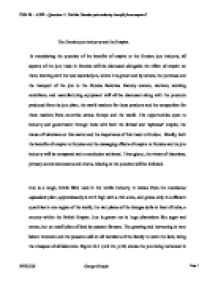 The Dundee jute industry and the Empire.

The Dundee jute industry and the Empire. In considering the question of the benefits of empire to the Dundee jute industry, all aspects of the jute trade in Dundee will be discussed alongside the effect of empire on them. Starting with the raw material jute, where it is grown and by whom, the purchase and the transport of the jute to the Dundee factories. Factory owners, workers, working conditions, and manufacturing equipment will all be discussed along with the products produced from the jute plant, the world markets for these products and the competition for these markets from countries across Europe and the world. The opportunities open to industry and government through trade with both the formal and 'informal' empire, the views of historians on this matter and the importance of this trade to Dundee. Finally, both the benefits of empire to Dundee and the damaging effects of empire to Dundee and its jute industry will be compared and a conclusion achieved. Throughout, the views of historians, primary source documents and charts, relating to the question will be included. Jute is a tough, brittle fibre used in the textile industry. It comes from the Corchorus capsularis plant, approximately 8-10 ft high with a thin stem, and grows only in sufficient quantities in one region of the world, the wet planes of the Ganges delta in East of India, a country within the British Empire. ...read more.

In Dundee this meant employing the cheapest labour possible, women. This brought many problems to Dundee, low wages, high unemployment among the male population, and the worst infant mortality rate of any of the fifteen principle towns in Scotland 174 per 1000 in 1904. (Anthology, 6.11, p.428) Indeed the working conditions within the Dundee factories must have been very poor as A Calcutta Dundonian wrote "I may state that the women and children are better cared for under our Factory Act than yours (Dundee). Our women and children work fewer hours per week, are better and more sanitarily housed, can save a greater percentage of their wages, and enjoy more holidays than the Dundee mill workers do." (Anthology, 6.7, p.419) Despite the risks involved some factories were very successful. The Cox Brothers Camperdown Works for example. In 1864 it had 10,018 spindles, 560 power looms and employed 3,200 hands. (Anthology, 6.8, pp.422-3) By 1903 they had grown to 20,00 spindles, 1000 power looms, occupying 28 acres and employing 5,000 hands and were the largest manufacturers in the world. Harry Walker and Sons Ltd jute spinners and manufacturers, company records show that from 1892-1914 the company made a profit every year except for 1909 when a small loss was made. ...read more.

The town benefited from employment in the textile factories, the docks the merchants, traders and brokers. Factory owners benefited from huge profits which they reinvested in foreign markets particularly the US. It benefited from trading links established across the world in securing the empire and from the trust in Britain as the leading financial controller of world trade and overseas investment. There were however many drawbacks for Dundee from empire. The competition from jute manufacturers within the empire in Calcutta had a huge impact on the Dundee manufacturers, whose markets were greatly depleted and whose position as supplier to the whole world became short lived as the Calcutta manufacturers supplied four times as much jute to the world markets than Dundee did. It was harmed by the refusal to impose tariff reforms, where the financiers, Gentlemen Capitalists protected their overseas financial investments before the export industry. It was severely damaged by the low wages and long hours that the mainly female staff that worked in the factories, poverty, male unemployment, poor health and infant mortality all being examples of this. It would be fair to say that the benefits outweighed the drawbacks of empire. For sixty years The Dundee jute industry flourished and expanded. Huge profits were made but they were not ploughed back into the town. Which may well have been as damaging to the town and industry as all the drawbacks of empire. ...read more.