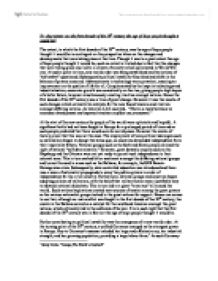 To what extent was the first decade of the 20th century the age of hope people thought it would be?

it proved significant as France and Britain had been enemies since the beginning of time, and the unification of both proved that Germany was a major threat to the balance of power in Europe. Further in 1907 Russia and Britain signed an Entente, and now the Entente Cordiale had grown into a triple Entente between France, Russia and Great Britain. Such diplomatic alliances evoked sentiments of fear and anxiety amongst people, as they felt the security and stability of their countries were being threatened. As such one can interpret that the first decade of the 20th century was not the age of hope people thought it would be. At the turning point of the 20th century, notions of the "old order" were consistently challenged, such as the social structure. At the time, the fundamental division which existed within most societies was that of class, that is the rich capitalist class and the working proletariat class. However near the end of the 19th century the working class started to question whether they were receiving fair treatment. By the start of the 20th century, the working class had become increasingly well-organised and was effectively agitating for an improvement on their lot, exerting direct pressure on their governments. ...read more.