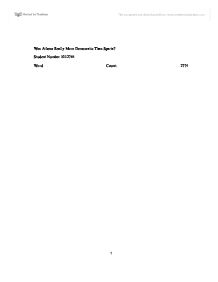 Was Athens more democratic than Sparta?

Was Athens Really More Democratic Than Sparta? Student Number 1012764 Word Count: 2774 Athens and Sparta were undeniably the two greatest cities in Ancient Greece, yet the method by which they ruled and governed their people varied greatly. Both Athens and Sparta ruled using some elements of democracy and a superficial observer may assert that Athens was the more democratic of the two. However, upon further observation one could state that Sparta was in fact as democratic as its contemporary rival. This essay will systematically discuss each theme of their differing societies, analyzing and comparing them as the essay progresses. To add validity to the arguments presented, this essay will use both ancient sources such as Aristotle and Xenophon, as well as the findings of modern debates and scholarship. The conclusion will succinctly summarize the arguments and analysis of the essay. The first and greatest difference in democratic style was the structure and make-up of the government itself. The government of both Athens and Sparta had several common or similar institutions that this essay will compare in terms of democratic value. The first of these institutions are the archons of Athens and the kings of Sparta. The institution of the archon evolved from being 'elected under qualifications of birth and wealth' (Aristotle Athenian Constitution, 3) to being a paid position elected by Pericles's lot, meaning that 'every citizen had an equal chance of holding political office' (Bury, 1975, p. 216). Pericles's was the purest form of lot, in that there was no election to decide which men were eligible. The introduction of pay to the position allowed no reason for confining the archonship to the richer classes. ...read more.

Despite this, we see ambitious citizens becoming skilled orators or rhetors in order to influence the assembly especially those 'under the two great fourth century educators, Plato and Isocrates' (Boardman, 1986, p. 272). These men usually had access to teaching that the less affluent did not, adding a slight element of oligarchy to the assembly. The power of the assembly had another dimension in that its effect was immediate, whilst modern day democracies may take months to pass legislation; they met 3 or 4 times a month meaning that it was able to act in response to most major events. The least democratic power of the assembly was the ability to remove a citizen's right to live in the city, he would remain a citizen but would be unable to attend assembly meetings. This measure was open to abuse such as in the case of Aristeides in which votes on ostracism were influenced. (Plutarch Aristeides, 7.1-8) Although this is a fictional account, it gives 'support for the fact that the illiterate participated in ostracisms' and that ballot papers were mass produced (Dillon and Garland, 2000, p. 135). The Spartan opposite of the Ecclesia was the Apella. All Spartan men over the age of 13 who had completed the 'agoge' (Xenophon 2.1-8) were members or Spartiates for life and in this sense it was democratic in the Athenian sense. The assembly had the duty of making decisions 'shouting and not by voting' (Thucydides I. 87. 1-2). This in itself is a contested issue as on a basic level it awards power to then man with the loudest voice and is easily susceptible to bias by the Spartan who is judging the 'acclimation' (Croix, 1972, pp. ...read more.

10). Slavery in Athens can be desvribed as an 'unequal but personal alliance based on mutual interest and close intimacy' (Osbourne, 2000, p. 158). In Sparta however, slaves or helots were more akin to serfs in that they worked the land and paid tribute to the spartiates. There were revolts of the helots and stories of their mistreatment by the Spartans (Myron, Apud Athenaeus, 14, 647d). The slaves of Athens and helots of Sparta were not considered as citizens, thus this is undemocratic and neither society treated them as equal human beings in reality. To summarise the essay, the main points of conflict will be repeated and analysis of which society is the more democratic will be reached. As we have seen, the separate institutions of the Athenian and Spartan government share many commonalities, but the Athenian's approach to democracy is so radical that it really cannot be compared to Sparta. The Ecclesia, the council and the popular courts are all more representative of the people than the Apella, Gerousia and the Ephors. The mixteure of selection by lot and the strong influence of the general assembly means that power is really in the hands of the Athenian demos whereas the Spartiates wield much less power in the face of the exectutive of Sparta. Whether or not the Athenian approach is sustainable is the topic for another discussion but we can assert that the all encompassing machinery of Athenian government is more democratic than the democratic oligarchy hybrid of Sparta. Sparta does however show more signs of social equality, helots have more freedom of location and work; women are given more freedom also. Equal education and the traditional ways of Spartan dining also show equality amongst men devoid of wealth disparity, but democracy in definition is purely political and for this reason Athens is the more democratic. ...read more.