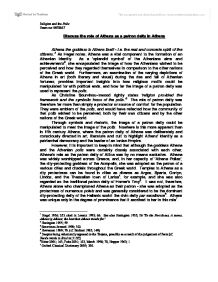 Discuss the role of Athena as a patron deity in Athens.

Discuss the role of Athena as a patron deity in Athens Athena the goddess is Athens itself - i.e. the real and concrete spirit of the citizens.'1 As Hegel notes, Athena was a vital component to the formation of an Athenian identity. As a 'splendid symbol' of the Athenians aims and achievements2, she encapsulated the image of how the Athenians wished to be perceived and how they regarded themselves in comparison to the other nations of the Greek world. Furthermore, an examination of the varying depictions of Athena in art (both literary and visual) during the rise and fall of Athenian fortunes, provides important insights into how religious motifs could be manipulated for with political ends, and how far the image of a patron deity was used to represent the polis. As Christine Sourvinou-Inwood rightly states 'religion provided the framework and the symbolic focus of the polis.'3 The role of patron deity was therefore far more than simply a protector or source of comfort for the population. They were emblem of the polis, and would have reflected how the community of that polis wished to be perceived, both by their own citizens and by the other nations of the Greek world. Through symbols and rhetoric, the image of a patron deity could be manipulated to meet the image of the polis. Nowhere is this more apparent than in fifth century Athens, where the patron deity of Athena was deliberately and consciously directed in art, literature and cult to highlight Athens' identity as a patriarchal democracy and the leader of an Ionian Empire. However, it is important to keep in mind that although the goddess Athena and the Athenian polis were certainly closely associated with each other, Athena's role as the patron deity of Attica was by no means exclusive. Athena was widely worshipped across Greece, and, in her capacity of 'Athena Polias', the city-protecting goddess of the Acropolis, she was adopted as the patron of a various cities and citadels throughout the Greek world. ...read more.

Further to this, the various mythological battle scenes adorning the sides of the temple37 show a noticeable theme of civilised order defeating barbaric chaos38, with Athena taking a central role in defeating the Giants, at the side of Zeus and the other Olympian immortals39. The east and west pediments served as visual depictions of Athena's miraculous birth and contest with Poseidon for patronage of the city; constant reminders of the city's debt to Athena and her favour over them40. The symbolism of the Parthenon sculptures, therefore, expressed the Athenian ideal through association with their patron deity, noting their military prowess, godly favour, strength and supremacy to all citizens and visitors to their land. The immediate motives for the erection of the Parthenon were therefore chiefly political - it was built as an ostentatious display of wealth and power to the subject-states of the Delian League41. But the religious motives of such a construction cannot be entirely divided from the political ends. The building was primarily a means of praising the goddess, and, by extension, praising the Athenian polis who the goddess represents. 'The Athenians are her people, she is their goddess.'42 The subject matter depicted on the Parthenon Frieze has long been a matter of some debate43. The issue is a thorny one (and one I shall not discuss here), but it is noteworthy that a number of scholars maintain that the frieze represents a procession of the Panathenaea, the festival of games to commemorate the war between the Giants and the Gods, and particularly Athena's part in that conflict44. Like the Parthenon, the Panathenaea mirrored the development of the city45, in that it was central to the civic ideology of the polis and that it grew in popularity and importance as the polis' power increased. From 566, for example, a number of innovations were implemented and the Panathenaea became Athens' greatest festival46, moving from being a domestic affair to a ceremony that was to include 'all Athenians'47. ...read more.

The Athenians were therefore using the symbol of Athena to set a precedent for their own divine right to rule over the Greeks of the Delian League, an indication of the assertions of Athenian power that were to follow89. The concept of Athena as a symbol of the Athenian people was spreading, and imperial edicts in the early years of her Empire certainly demonstrate a careful strategy to place the entire Ionian people under the banner of Athena, and therefore that of the Athenian polis. For example, though never fully enforced, the so-called Coinage decree, dated between c.450 and c.446, sought to impose the use of Athenian coins, weights and measures on all the cities of the Empire, to the exclusion of all others90. The Decree, which survives only in fragmentary form, had no obvious economic significance for Athens, and we must therefore assume that the true significance was political: that Athens was aiming to diminish sovereignty by removing their right to strike coins bearing their own city's badge91. Athena, the personification of Athens, was to be the emblem of the entire Aegean and the Ionian people. They were bonded by their link to the goddess, and the gods approved of Athens' position as leader of Greece. It can be seen, therefore, that the image of Athena as a patron deity was a vital factor in the perception of the Athenian polis, particularly in the years of the late sixth and fifth centuries, when the polis sought to form an identity that would encapsulate their emerging democracy and empire. Through a careful manipulation of the mythological attributes associated with the goddess, Athens was to stake her claim as the champion of the Greek people. Not only were they the foremost state in the arts of warfare and the crafts, the traditional attributes of Athena, but their closeness to the Olympian pantheon and autochthonic status granted them the right to rule over the other Greek poleis. The image of Athena symbolised Athens as the greatest nation of all the Greeks. ...read more.