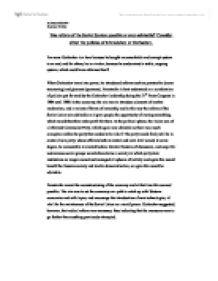 Was reform of the Soviet System possible or even advisable? Consider either the policies of Khrushchev or Gorbachev.

Was reform of the Soviet System possible or even advisable? Consider either the policies of Khrushchev or Gorbachev. For some Gorbachev is a hero because he bought an unworkable and corrupt system to an end, and for others, he is a traitor, because he undermined a stable, ongoing system, which could have reformed itself. When Gorbachev came into power, he introduced reforms such as perestroika (recon- structuring) and glasnost (openness). Perestroika is best understood as a combination of policies put forward by the Gorbachev leadership during the 27th Party Congress in 1986 until 1989. In the economy, the aim was to introduce elements of market mechanism, and a variety of forms of ownership and in this way the reform of the Soviet Union was advisable as it gave people the opportunity of owning something, which would therefore make profit for them. In the political sphere, the vision was of a reformed Communist Party, which again was advisable as there was much corruption within the party that needed to be rid of. The party would firmly still be in control, but a party, whose officials both at central and local level would, to some degree, be accountable to elected bodies. ...read more.

The Congress was to elect a Constitutional Court, with the authority to oversee the legality of any constitutional amendments. There was to be a combination of the party's institutional power and authority with a new basis of legitimacy: electoral accountability. This shows it should not have been advisable because if the party was to retain its power and authority, it was difficult to see what the purpose of the legislature was. Gorbachev's policies of reform, especially glasnost created problems as I have mentioned. It was reflected again when in March 1989, elections for the CPD were held. In Moscow, Boris Yeltsin stood. His calls for an end to the special privileges and his attacks upon the party apparatus, his ability to establish a rapport with a crowd made him the people's hero in Russia. The party apparatus did not know how to fight an election campaign as it never had to before and this tells us that Gorbachev's reforms at the time were not possible and certainly not advisable. One could say the establishment of the CPD was not advisable as political authority began to slip away from the leading party bodies to the CPD. ...read more.

The very forces Gorbachev hoped to use to implement his reforms, the Party and the Ministerial bureaucracy, resisted his policies. Gorbachev realised the extent of the tasks he was undertaking, but he did not realise the complexity and overestimated the extent to which he had control over events. He introduced democratisation that freed him from the apparat but he created an opposition that constrained him in introducing more reforms. By introducing perestroika and glasnost, he accelerated the system. To conduct the reforms which he intended to, most would argue that an authoritarian system is ideal so Gorbachev did well in introducing perestroika but he should not have introduced glasnost as it brought down authority as it gave people to express dissatisfaction. But having said that, the reasons for the fall of the Soviet Union was not just due to Gorbachev's reforms, but also because there was a decline in productivity which was depressing the economy and reducing living standards. The size of the Soviet economy masked major distortions, above all the distribution between defence and consumer goods, raw materials and energy extraction, so in this way reforms were advisable as reform of the economy and the political system was essential if the Soviet Union was to meet the challenge of technological and social modernisation. M.Patel 0022699 Russian Politics ...read more.