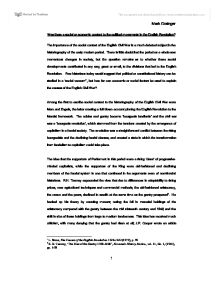 Was there a social or economic content to the political movements in the English Revolution?

Was there a social or economic content to the political movements in the English Revolution? The importance of the social context of the English Civil War is a much debated subject in the historiography of the early modern period. There is little doubt that the period as a whole saw momentous changes in society, but the question remains as to whether these social developments contributed in any way, great or small, to the divisions that led to the English Revolution. Few historians today would suggest that political or constitutional history can be studied in a 'social vacuum'1, but how far can economic or social factors be used to explain the causes of the English Civil War? Among the first to ascribe social content to the historiography of the English Civil War were Marx and Engels, the latter creating a full-blown account pinning the English Revolution to the Marxist framework. The nobles and gentry became 'bourgeois landlords' and the civil war was a 'bourgeois revolution', which stemmed from the tensions created by the emergence of capitalism in a feudal society. The revolution was a straightforward conflict between the rising bourgeoisie and the declining feudal classes, and created a state in which the transformation from feudalism to capitalism could take place. ...read more.

In his Reappraisals in History6, J.H. Hexter criticises Tawney as 'too Marxist' and Trevor-Roper as too obsessed with these economic motivations at the expense of political motivations. He draws attention to the fact that the gentry described by the two historians do not feature largely in the affairs of Parliament in the years before the Civil War, and those that did sit in the House of Commons "neither talked nor acted like would-be rulers of the realm"7. In other words, they did not seek the power that Tawney and Trevor-Roper suggest. Furthermore, Perez Zagorin disputes the accuracy of using the idea of class when dealing with the social system in which the English Revolution occurred8. He argues that the system, "of [which] the ruling principle was honour and the dignity attached to way of life"9, was based on status, which was much less to do with one's economic standing than the arguments of Tawney and Trevor-Roper might suggest, and terms like 'peers' and 'gentry' have no economic basis; certain members within these groups may have risen while others declined. This point, however, does not preclude the political movements in question from having their basis in these social statuses, even if not in economic classes. ...read more.

Zagorin insists that the English Civil War was no kind of class struggle as described by Engels or Tawney, but that "The fundamental cleavage of the decades before the civil war was that which opened within the dominant class between the crown and its adherents on the one side, and its opponents on the other" [original emphasis]. The two sides formed vertically, dividing both the peerage and the gentry, rather than laterally between the strata of society. 13 Zagorin adds that it was the religious dispute that polarised around this split which disposed men towards one side or the other. As Stone perceptively points out, while "some historians see the breakdown of 1640 and the war of 1642 as the product merely of a series of political blunders by those in power"14, it is likely that the social trends which preceded the civil war were, if not a significant cause of the conflict, certainly pre-conditions which made it possible. As with all things, the origins of the conflict are varied and complex, and if the political movements and divisions which led to the English Revolution had any social or economic content, it can only be seen alongside the other significant issues; changing ideals and ideologies, both political and religious. ...read more.