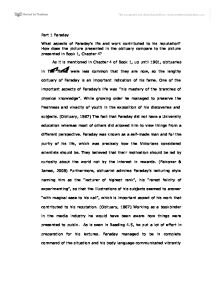 Part 1 Faraday What aspects of Faraday's life and work contributed to his reputation? How does the picture presented in the obituary compare to the picture presented in Book 1, Chapter 4? As it is mentioned in Chapter 4 of Book 1, up until 1901, obituaries in The Times were less common that they are now, so the lengthy obituary of Faraday is an important indication of his fame. One of the important aspects of Faraday's life was "his mastery of the branches of physical knowledge". While growing older he managed to preserve the freshness and vivacity of youth in the exposition of his discoveries and subjects. (Obituary, 1867) The fact that Faraday did not have a University education whereas most of others did allowed him to view things from a different perspective. ...read more.

Faraday managed to be in complete command of the situation and his body language communicated vibrantly with the listeners. He was very well positioned to present his scientific work to the public in most compelling ways possible. These aspects of his life and work made him famous in scientific as well as public society. The obituarist says that "the world of science" had lost one of the "most assiduous and enthusiastic members", that shows Faraday as highly valued and famous in the scientist community. Faraday was regarded as famous in non-scientific society, but for different reasons. He displayed his experiments of scientific processes with "as much zest as is usually displayed in lighter amusements", so young people crowds would come for entertainment rather than for scientific knowledge. ...read more.

Both authors focus at their particular audiences, Chapter 4 is aimed at History of Science students whereas the obituary focuses on the general public. Faraday's religious beliefs influenced his work, his approach to science was based on his Christian beliefs. His faith underlayed the high moral code which Victorians highly valued. They were discussed in the chapter, whereas in the obituary none is mentioned regards his religion, although from the style that obituarist writes it is obvious that Faraday was admired. The fact that the obituary appeared in a newspaper directed at the non-scientific audience influenced the author to leave out some aspects of Faraday's life and work, such as going into detail about the experiments and his scientific work, also his personal life and faith, he expressed a more overall view of the life of this natural philosopher. ...read more.