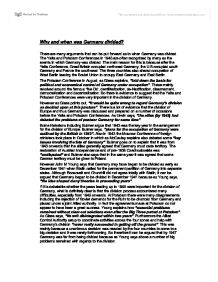 Why and when was Germany divided? 1945

Why and when was Germany divided? There are many arguments that can be put forward as to when Germany was divided. The Yalta and Potsdam Conferences in 1945 are often recognized by many as the events in which Germany was divided. The main reason for this is because after the Yalta Conference, Great Britain occupied northwest Germany, the U.S occupied south Germany and France the southwest. The three countries also shared occupation of West Berlin leaving the Soviet Union to occupy East Germany and East Berlin. The Potsdam Conference in August, as Glees explains, "laid down the basis for political and economical control of Germany under occupation". These mainly revolved around the famous 'five Ds', demilitarization, de-Nazification, disarmament, democratization and decentralization. So there is evidence to suggest that the Yalta and Potsdam Conferences were very important in the division of Germany. However as Glees points out, "it would be quite wrong to regard Germany's division as decided upon at this juncture". There is a lot of evidence that the division of Europe and thus Germany was discussed and prepared on a number of occasions before the Yalta and Potsdam Conferences. As Urwin says, "the allies (by 1945) had debated the problems of postwar Germany for some time". Some historians including Bulmer argue that 1943 was the key year in the arrangement for the division of Europe. Bulmer says, "plans for the occupation of Germany were outlined by the British in 1943". ...read more.

So therefore, the division of Germany may have not been completed as late as 1961, a whole two decades after I started speaking about the division process beginning. So overall the division of Germany took a long time. In my opinion there were two major parts to the division process of Germany. The first was from around 1941 to 1947 that included the discussions and agreements over the occupation of Germany and ceding of territory. During this time period all four allies appeared to co-operate with each other reasonably well. The second period was from around 1947 when as Young says, "cold war relations started to set in" up until 1961 with the building of the Berlin Wall. During this time period relations were poor between the Soviet Union, and France, the USA and the UK, and both ideologies went their separate ways including the forming of separate western and eastern states. With regards to why Germany was divided, there are a number of reasons, all relating to different parts of the division process. The four allies also had their own specific reasons why they wanted Germany to be divided. For example, France had been affected on many occasions in the past by the military strength of Germany and wanted to make sure there was never a chance again of a German invasion of French soil. In 1871, France lost Alsace and the eastern part of Lorraine to Germany as a result of the Franco Prussian War, which it occupied until 1918. ...read more.

So therefore there is evidence to suggest that America may have seen division as a chance of punishing Germany, although this most certainly wasn't the case after the beginning of the cold war. America's involvement in the Nuremberg trials in which thousands of Germans were investigated and convicted for n**i crimes could be an argument for America punishing Germany but without greater analysis it appears to be a weak one. After 1947, when cold war relations intensified between America and the Soviet Union, the continuation of the division process seems quite easy to explain with both the Soviets and the three remaining allies setting up their own states in order to put in place their different ideologies. For example as Glees says, "By 1948, the Americans felt they could openly develop western Germany into a state which could be part of the Western community". It can be argued that as a result a kind of power struggle developed in Germany over promoting the benefits of communism or capitalism as exemplified by the Soviet Unions involvement in the Berlin Blockade in 1948 and the building of the Berlin Wall in 1961. So overall there are a number of arguments that can be debated as reasons for the division of Germany including specific countries wishes for punishment and revenge such as France and Russia, the need for restructuring and reconstructing Germany and also the aim to ensure Germany could never wage another aggressive war again in the future. After 1947, the reason for the further division of Germany can be explained by the intensification of the cold war and the issues brought on by this. ...read more.