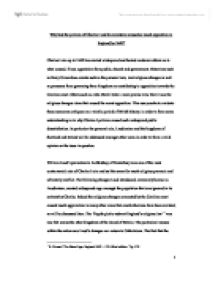 Why had the policies of Charles I and his ministers aroused so much opposition in England by 1640?

Why had the policies of Charles I and his ministers aroused so much opposition in England by 1640? Charles I rein up to 1640 has created widespread and heated academic debate as to what caused, if any, opposition from public, church and government. Historians such as Barry Coward see events such as the personal rule, vast religious changes as well as pressures from governing three kingdoms as contributing to opposition towards the Caroline court. Others such as John Morrill take a more precise view that it was the religious changes alone that caused the worst opposition. This essay seeks to evaluate these numerous critiques on a volatile period of British history, in order to form some understanding as to why Charles I policies caused such widespread public dissatisfaction. In particular the personal rule, Laudianism and the kingdoms of Scotland and Ireland will be addressed amongst other areas in order to form a valid opinion on the issue in question. William Laud's promotion to Archbishop of Canterbury was one of the most controversial acts of Charles I rein and set the scene for much religious paranoia and ultimately conflict. The following changes Laud introduced, commonly known as Laudianism, created widespread rage amongst the population that was ignored in its entirety by Charles. Indeed the religious changes concocted by the Caroline court caused much aggravation in many other areas that could otherwise have been avoided, as will be discussed later. ...read more.

Funding three kingdoms was a difficulty, and academic decision is split as to the level of resentment the various taxes issued on the public caused. Medieval laws were resurrected in order to raise capital rapidly. The 1630s saw fines issued to those holding land worth more than �40 p.a. or more who had not received a knighthood6, using laws all but forgotten since the early 16th century. Fines could be as high as �70, and taxation on the landed gentry and merchants was relentless. But this is where the likes of Kishlansky or Coward have missed a crucial point - the gentrified classes did not make up all of the country. They were a mere percentage compared to the peasantry. Of course they would resent the king for suddenly taxing them highly, but to use this to generalise the entirety of the country cannot be logical. As Hibbert notes, the benefits to the country as a whole throughout the 1930s as a result of these taxes was considerable. Roads were improved, ale houses regulated, a postal service was introduced, and efforts to make local government efficient put in place7. Indeed, the sudden tightening of the purse forced Charles to end the wars with Spain and France by 1630, which was greatly appreciated. However there were signs of apprehension from social groups that had every reason to be content with these circumstances8. Ultimately the resentment came not from the sudden rise in highly specific taxes, but from the paranoid view that concentration of these taxes were on religious grounds. ...read more.

The personal rule was born out of this stubbornness, as were many of the most troubling of policies. The levies and taxes bought about along with growing opposition across the kingdoms from all walks of life were the product of growing religious tensions as a result of ridiculous enforcements. It was almost the exclusive policy of Charles to spread and enforce his fundamentalist values echoed by Laud no matter what the cost. The public belief that fees from ship money and other taxations were being used as reserve in order to protect the nation from enemies was abruptly ruined when they discovered the only enemy came from within. The funding of a quasi-religious 'crusade' in Scotland was deeply unpopular, as was the growing feelings and paranoia of the reality of the Popish Plot. It was not indecision that led to Charles unpopularity - it was his failure to accept any other opinion bar his own. This inflexibility made his religious reforms particularly volatile across the nation, and they infiltrated each and every aspect of his reforms. And it was this fundamentalist approach to religion, with vain attempts to create conformity across the three kingdoms that led to the deep-set unpopularity. Charles distance from reality, aided by a contingency of ministers who told him what he wanted to hear, not what he ought to15, blinded him to the consequences of his actions. This blindness simply gave the people a sense of an arrogant monarch who showed no affection for his people's happiness, and the undercurrent of anger quickly surfaced into an unquenchable desire for change. ...read more.