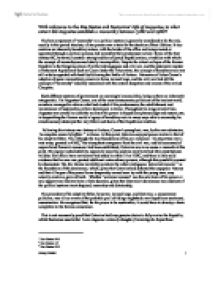 With reference to the Res Gestae and Suetonius' Life of Augustus, to what extent did Augustus establish a monarchy between 31BC and 19BC?

With reference to the Res Gestae and Suetonius' Life of Augustus, to what extent did Augustus establish a monarchy between 31BC and 19BC? The key component of 'monarchy' as a political system is generally considered to be the rule, usually in this period absolute, of one person over a state for the duration of their lifetime. It also contains an inherently hereditary nature, with the holder of the office not being elected or appointed through a political process, but named by their predecessor as heir. Rome of the first century BC, however, boasted a strong tradition of proud Republicanism; a tradition with which the concept of monarchy seemed wholly incompatible. Despite the virtual collapse of the Roman Republic in the foregoing years of military demagogues and civil war, and the systematic murder of vehement Republicans such as Cicero under the Triumvirate, the concept of hereditary rule was still widely regarded with hostility following the Battle of Actium. Memories of Julius Caesar's adoption of quasi-monarchical powers in Rome loomed large, and the civil war had left the concept of "monarchy" indelibly associated with the eastern despotism and excess of the reviled Cleopatra. Such different systems of government are seemingly irreconcilable, being as they are inherently antagonistic. Yet Augustus Caesar, one of the most consummate politicians of the ancient world, somehow managed to achieve what had eluded all his predecessors; the establishment and maintenance of sustainable political dominance in Rome. Throughout his long period of rule, Augustus was careful to cloak the reality of his power in Republican phraseology and custom, yet, in bequeathing the Roman world a legacy of hereditary rule in many ways akin to monarchy, he simultaneously destroyed the very fabric and ideals of the Republican tradition. ...read more.

Further enhancements were made to the political settlement in 23BC, when Augustus renounced the perpetual consulship and gained instead all the components of tribunician power, in addition to imperium maius over the other consuls that was valid even with the boundary of the pomerium. This settlement is alluded to neither in the Res Gestae (Augustus simply mentions that he was awarded tribunician power15) or in Suetonius, whose coverage of constitutional matters is sketchy. Dio mentions that Augustus was granted tribunician power, but only vaguely implies a political purpose in saying 'Augustus resigned the consulship...in order that as many as possible might become consuls'16 The reason for these changes is unclear; one interpretation is that Augustus wanted to make his power even less overt, perhaps as a result of a conspiracy against his life in 24BC (although Dio dates the conspiracy to 22BC, the year after the settlement,17 which may suggest that it occurred as a response to the settlement), another is that referred to above by Dio, namely, that he realised his monopoly of the consulship was infuriating other politicians as it limited their possibilities of advancement to the position. Although the second settlement ostensibly reduced Augustus' power, depriving him of his consular imperium, and probably, therefore, his imperium within Rome itself, it transpired that the period of 24BC-19BC was key in the establishment of the principate. To what extent Augustus anticipated the constructive effects of the settlement is difficult to gauge, but given his immense political acumen, it cannot be discounted that the settlement was a highly calculated move. To the politically unsophisticated masses, this settlement indicated Augustus' resignation from Roman politics. ...read more.

Whilst Augustus' longevity and continued success would allow his power to further increase, by 19BC he had, as Suetonius claimed was his aim, 'built firm and lasting foundations for the Government of the State.'26 His next concern was to ensure that 'these foundations which I have established for the State will abide secure.'27 This appears to be a veiled reference to his wish to appoint a successor, which is perhaps the best proof that Augustus' aim was always to develop hereditary monarchy in Rome. Even before 19BC, Augustus was preoccupied with the issue of the succession, particularly during his serious illness of 23BC. Although Dio asserts that Augustus 'did not, to be sure, appoint a successor,28' he, perhaps surprisingly, states that 'all were expecting that Marcellus would be preferred for the position'29 (Augustus seemed to instead prefer Agrippa). The latter quotes suggests that even as early as 23BC, there was a growing acceptance of hereditary rule, one of the most important precepts of monarchical government. By 19BC, the precepts of monarchy, only recently anathema to proud senators and politicians, were beginning to become the undeniable realities of a Roman political system increasingly dominated by one individual, Augustus Caesar, who had carefully yet systematically undermined the values of the Republican system he had purported to protect. Whilst Augustus did not officially possess monarchical power and was ultimately subject to the law and constitution, his skill in amassing numerous offices, powers and honours, combined with his popularity and unparalleled auctoritas, meant that his authority was increasingly unchecked. Even after only 15 years of rule, Caesar's heir had skilfully laid the foundations for a monarchy distinctly Roman, a monarchy cloaked in Republican phraseology and custom, yet which would consign the Republic itself forever to history. ...read more.