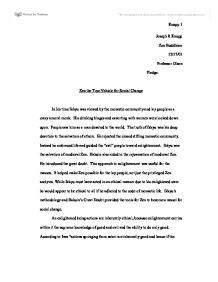 Joseph R Knupp Zen Buddhism 12/17/01 Professor Olson Pledge: Zen the True Vehicle for Social Change In his time Ikkyu was viewed by the monastic community and lay people as a crazy amoral monk. His drinking binges and cavorting with women were looked down upon. People saw him as a man devoted to the world. The truth of Ikkyu was his deep devotion to the salvation of others. He rejected the closed stifling monastic community. Instead he embraced life and guided the "evil" people toward enlightenment. Ikkyu was the salvation of medieval Zen. Hakuin also aided in the rejuvenation of medieval Zen. He introduced the great doubt. This approach to enlightenment was useful for the masses. It helped make Zen possible for the lay people, not just the privileged Zen acolytes. While Ikkyu must have acted in an ethical manner due to his enlightened state he would appear to be ethical to all if he adhered to the code of monastic life. Ikkyu's methodology and Hakuin's Great Doubt provided the tools for Zen to become a vessel for social change. ...read more.

His frequent visits to the wine shops and brothels of Kyoto allowed him to come in contact with the ignored lower classes of Japan. Ikkyu saw his responsibility to aid in the enlightenment of others to apply not only to the religious elite, but to the amoral majority. Ives views this as the social obligation that Zen masters have to society. "Hisamatsu states, 'True religious life lies not in a human being receiving compassion, but in a turning over of that view to our practicing compassion." (Ives 76) While the majority of modern Zen monks remain hidden within their monasteries and teach only the religious elite Ikkyu set the precedent for aiding all peoples. He went to the wine shops and brothels to aid the forgotten, the refuse of mankind. According to Hakuin the Great Doubt is the absolute road to enlightenment. Hakuin states "If those who study Zen are able to make the great doubt appear before them, a hundred out of a hundred, a thousand out of a thousand, will without fail attain awakening." (Yampolsky 144) When one faces the great doubt, the doubt of koans, the doubt of life itself, one must keep one word within their hearts Mu. ...read more.

The combination of the great doubt and the great koan Mu are the path to enlightenment for the masses. Ikkyu was the savior of Zen. He stood apart from his peers and stated that Zen would become a social force for change. He wanted to end the classic Zen approach of distance from society. Ikkyu wanted Zen to become a force for social change. By bringing enlightenment to the people Ikkyu planned to better all of society. Ives argues for the methodology of Ikkyu. He argues that Zen should come down from their lofty perch and improve society now. Through the use of the great doubt and preaching to the masses Zen could be a force for social change. In order to bring about a social utopia the people themselves must first become enlightened. Enlightenment is the key to social utopia. If all beings were enlightened everyone would work for the good of all; war, poverty, starvation would all become things of the past. Ikkyu and the great doubt give us the tools for bringing about a social utopia. Mass enlightenment is certainly not an easy task, but the rewards are certainly worth the effort. The Zen monastic community have been given the tools, now the must decide to use them. Knupp 4 ...read more.