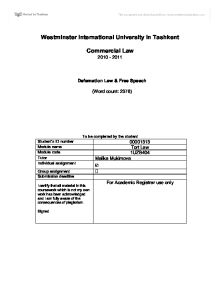 Westminster International University in Tashkent Commercial Law 2010 - 2011 To be completed by the student Student's ID number 00001313 Module name Tort Law Module code 1UZB404 Tutor Malika Mukimova Individual assignment ? Group assignment ( Submission deadline I certify that all material in this coursework which is not my own work has been acknowledged and I am fully aware of the consequences of plagiarism. Signed For Academic Registrar use only Contents: Contents: 1 I. Introduction: 2 II. Defamation law in England: 2 I. General overview (Defamation and Free Speech): 2 II. Defences: 3 III. Defamation in Russian Law 4 I. General Overview (defamation and free speech): 4 II. Defences: 5 IV. Evaluation: 5 V. Bibliography: 7 I. Introduction: The basis of modern society is formed by the fundamental human right of freedom of speech. The importance of having this fundamental right is immense. In order for this world to continue modernizing, it is very important to let every individual voice his/her opinion. However, in certain situations what one person says (intentionally or unintentionally) might harm the reputation of another person. I believe that defamation law and freedom of speech are two different sides of the same coin. They always go together, yet talk about two contradicting concepts. If freedom of speech gives everyone the right to express themselves, then defamation limits this right, in order to protect the reputation of individuals from being harmed. ...read more.

Defamatory statements made on a privileged occasion are not actionable. Privileged occasions are those, where public interest in freedom of speech is such that it overrules any concerns as to the effect of this freedom on the claimant's reputation.5 There are two types of privileges, absolute and qualified. Absolute privilege applies to statements made in Parliament, court hearings, any document ordered to be published by House of Parliament and communications between certain officers of state. Qualified privilege applies to an occasion where the person who makes a communication has an interest or a duty (legal, social, or moral) to make it to the person to whom it is so made has a corresponding interest or duty to receive it.6 The rationale for this is said to be the "common convenience and welfare of society". Unlike absolute privilege, the defence of qualified privilege will be defeated if malice is proved. Fair comment protects the defendant's right to criticize the claimant, which is why the defendant does not have to show that his/her words are true. However, this right to criticize is kept within strict boundaries. In order to qualify for this defence the defendant must prove that he/she was acting in public interest. Moreover the defendant should also show that the statement was based upon a set of facts and that the defendant honestly held that opinion. ...read more.

The main example would be placing the burden of proof on the defendant or assuming that the statement made by the defendant is false. I think that this places the defendant in an unfair position. In Russian law, the defences are very limited and the punishment is greater because defamation in Russian law is regarded as a criminal offence in certain cases. I think that defamation should not be regarded as a criminal offence under any circumstances because it "creates an impermissible "chilling effect" stemming the flow of protected speech".8 Moreover, the burden of proof shifts improperly, thus, requiring the defendant to prove his/her innocence. I believe that Russian defamation law needs to cut out defamation from criminal law completely. It can be seen that compared to English defamation law; Russian defamation law limits free speech to a greater extent. The main reasons are limited number of defences and defamation being a part of the criminal law. However, the Russian law has tried to improve the situation by implementing defamation in their Civil Code. The result of my research says, that despite the fact that the defences help to minimize the negative effect of defamation law on free speech it can be said that almost every legal system infringes free speech to some extent. The main reason for this is limited number of defences (in the case of Russian law) and in some cases the judges tend to favour the protection of reputation more than free speech. V. ...read more.