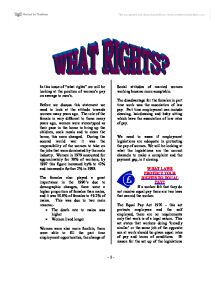 In this issue of &quot;what rights&quot; we will be looking at the position of women's pay on average to men's.

In this issue of "what rights" we will be looking at the position of women's pay on average to men's. Before we discuss this statement we need to look at the attitude towards women many years ago. The role of the female is very different to those many years ago, women were stereotyped as their pace in the home to bring up the children, cook meals and to clean the home, this soon changed. During the second world war it was the responsibility of the women to take on the jobs that were dominated by the male industry. Women in 1979 accounted for approximately for 38% of workers, by 1997 this figure increased by% to 42% and increased a further 2% in 1998. The females also played a great importance in the 1990's due to demographic changes, there were a higher proportion of females than males, and it was 50.8% of females to 49.2% of males. This was due to two main reasons:- * The death rate to males was higher * Women lived longer Women were also more flexible, there were able to fill the part time employment opportunities, the change of Social attitudes of married women working became more acceptable. ...read more.

Figure 2 clearly shows that there is still a gap in regards to average weekly and hourly earnings. Figure 2 1999 2000 Increase Full time weekly earnings Men 442.4 464.1 4.9% Women 326.5 343.7 5.3% Full tie hourly earnings Men 10.68 11.24 5.2% Women 8.71 9.17 5.3% Source: www.bbcnews.co.uk We also found that 180,000 female part time workers are paid below the minimum wage compared to males of 50,000 who are paid below the minimum wage. At present the wage gap between male and females in full time employment is 18%, for part time work the gap is of a greater proportion. Women involved in part-time work are paid on average 25% less than their male colleagues. The fact that the gap is bigger for full time employment does not surprise me. As researching this topic I have found as mentioned previously that there is a higher proportion of females who work on a part time basis as they have childcare facilities to accommodate. A question you may be asking yourself is why the payment gap is still there, the factor that I feel plays the strongest contribution is the gender differentials in occupation. ...read more.

this may detour them as they do not want to have a reputations of discrimination. The government need to make it easier for women and men to take up equal pay claims by simplifying and speeding up existing tribunal procedures. It has been known for a case to take up to two years for a case to be settled. The law need to devise a plan where the consequences of discrimination in the workplace are much more serious. Useful websites www.eco.org.uk www.dti.gov.uk www.acas.org.uk 18 Oct 2002 UK - Figures from the Office for National Statistics show that the gap in pay between men and women has started to open up again marginally with male earnings increasing at 4.8% in the year to April 2002 and equivalent female earnings growing at 4.5%. As a result female earnings only stand at 81.2% of male earnings. By contrast the pay of top executives appears to be storming ahead of average earnings with the top executives of FTSE 100 companies getting an average salary increase of 9.7% (according to a survey from Incomes Data Services). At the other end of the pay scale, part-time workers have also found their pay going up by considerably more than average earnings with a 7.3% average increase in hourly earnings. Source: www.bi/zed.co.uk - 1 - ...read more.