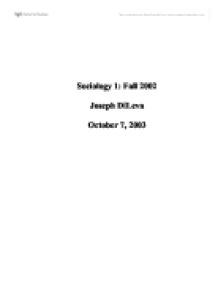 Prime areas of concern in the American workforce.

Sociology 1: Fall 2002 Joseph DiLeva October 7, 2003 Former President Bill Clinton: "Our challenge is twofold: first to restore the American dream of opportunity and the American value of responsibility; and second, to bring our country together amid all our diversity in a stronger community, so that we can find common ground and move forward as one." (Chavez, 1998) This quote comes from a televised speech in 1995 which was about the issue of defending civil rights and equal opportunity. These are two prime areas of concern in the American workforce. Due to the fact the U.S. is comprised of ethnic and gender varieties, methods are necessary to compliment a standard of respectability and fairness. However, policies which are implemented in the workplace to create a fair and respectable medium can create problems and many debatable arguments. Some work related issues that are relevant to both ethnic and gender differences are: affirmative action, feminism, sexual harassment, and even the "glass ceiling." These issues will be discussed in relation to how they impose argumentative problems in the workforce. Therefore, an informative point of view will show how one can be affected. Neither issue will be presented in a "pro" or "con" perspective. Instead, an unbiased account will show various arguments that apply to each respective issue - enabling the reader to have somewhat of a general understanding. Appropriate statistics and figures, along with the historical development of certain issues, will be incorporated as well. Due to California's populous and diverse nature, there will be some emphasis presented in this state. Hopefully the reader will be able to determine all the issues involved within a "neutral" perspective. California could be considered as the most ethnically diverse state in America. According to a state demographics survey conducted in 2002, "the annual population growth exceeded the half-million mark (591,000) for the fourth year in a row. ...read more.

209. He believed that discrimination that was ongoing; needed affirmative action as a necessary tool to satisfy California's diversity. Nevertheless, voters in favor of Prop. 209 won by a "9.2 percent margin - 54.6 percent to 45.4 percent." (Chavez, 1998) Figures of interest in a Los Angeles Times exit poll revealed 74 percent African Americans, 76 percent Latinos, and 61 percent Asians all voted against Prop. 209. Meanwhile, 63 percent of white males supported Prop. 209. Another side note, according to the Voter News Service Poll, revealed that 58 percent of white women compared with 66 percent of white men had supported Prop. 209. The significant number of votes by those considered as minorities showed that there was still a need for affirmative action - while the numbers relating to whites were not significantly high, yet still leaned towards abolishing affirmative action. A great upheaval resulted from the outcome of Proposition 209 voting -- when the issue of the XIVth Amendment was presented by concluding court decisions. In 1997, the House Judiciary Committee killed federal legislation to end affirmative action. The resulting example of the discrepancies within the vast diverse population of California evinces that great measures need to be achieved to satisfy our complex culture. In relation to all the states that comprise the American labor force, a sense of uniformity needs to be achieved in order for the diversity to prosper. With respect to Cornelius Grove and Willa Hallowell, both intercultural consultants, "cross-cultural differences are hindering day-to-day communications among workers. The misunderstanding lies in the differences between high-context and low-context cultures." (http://web2.infotrac.galegroup.com/itw/infomark/871/42/40181077w2/purl=rc1_ITOF) Both Grove and Howell consider the United States as an example of a low-context culture. Within this culture, "mutual expectations are less accurate, meaning must be made explicit, practical outcomes are emphasized, and individual self-reliance is common. In comparison to a high-context culture, like Japan, discussions within groups are very wide ranging, mutual expectations are quite accurate, meanings may be conveyed indirectly, and relationships and processes take precedence over self-reliance" (same as previous INTERNET source) ...read more.

Even if a man or women were to comply with sexual favors to an employer in order to gain advancement is another extreme example to take in to consideration. Any method in which sexual harassment is used to hinder a working environment and/or used to unfairly promote an employee can be tied into the realm of arguments from all the diversity issues in the workplace discussed. Men and women need a respectable and fair "playing-field" - and that could be said for all and every issue in which employees and employers strive for success. In retrospect, by incorporating all the issues relating to the workforce, it is very imperative that any progress made in developing a standard of decency, respectability, fairness, along with racial and gender unity, must all be used as a positive in which our society can become stronger. Injustices and mistakes from the past unfortunately served as a means in which many changes were necessary. From those changes, many progressive movements and efforts relating to the scrutiny of discrimination caused a respective historical transcendence. The issues that were discussed will probably always remain as key arguments within the workforce. Either directly or indirectly, affirmative action, feminism, the glass ceiling, and sexual harassment will all pose as problems within our society. It's impossible to believe that a "perfect solution" will prevail. Due to the tremendous diversity of the United States of America and especially that of California, it will take a long time for workforce problems to be tapered within a "satisfying" standard. However, with respect to history, as long as progress is made, society has the motive not only for improvement, but unification as well. It remains to be seen if a perfect harmony will exist in the workplace. Nevertheless, when continuing arguments come to their respective conclusions - in the form of future court decisions and voting results - then and only then can better answers be found. ...read more.