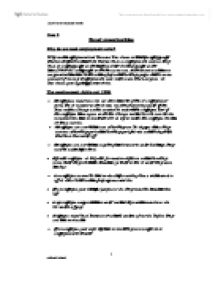 Why do we need employment acts?

Pass 3 Equal opportunities Why do we need employment acts? Why need employment acts because business could only employ people that are English and white but we have a employment's acts so they have to employ people with different skin colour people with disabilities and people with the same sex. Both women and men are protected under health and safety and that they get paid the same amount of money. Employment's acts make sure that everyone in business gets equal opportunities. The employment rights act 1996 * All employees must receive written details of their employment term, their contact within two month of starting work. If the boss makes change on the contact he must tell the employee but if the employee does agree with the change made, he/she can claim constructive dismissal which is try to make the employee hand it there notice. * All employee are entitled to see what they are being paid so they can see what they get and what they get after tax and things like that have been took off. * All employee are entitled to say they don't want to work Sundays they cant be sacked for this. ...read more.

This only applys to business with 15 employee or more Example of employment rights act 1996 A woman is demoting after she comes back from maternity leave the company said they where making it easy for her to work now she has a baby. Thursday, 10 October, 2002 A call centre worker - who was among 900 who lost their jobs in Pembroke Dock when ITV Digital collapsed - has launched a claim for unfair dismissal. Martin Davies, 46, a former employee of the 7C company, which provided customer services to ITV Digital subscribers, said he had not been given enough redundancy notice. The industrial tribunal hearing in Cardiff on Thursday was told that 7C had made more than 100 employees redundant after a consultation period of 31 days. Mr Davies claims employees were due 90 days of consultation and the company's failure to do so amounted to unfair dismissal. Merit 2 Example of Sex discrimination act 1975 A Company sales advertise for a saleswoman to sell coats in their store. They argue that most of their customs are female so a woman would be better. Tuesday, 14 January, 2003 A Coventry woman has won her case for sex discrimination against her former employers West Midlands Police. ...read more.

Officials later found that whilst all-white staff worked in the Moulin Rouge's dining room, all of the employees in the kitchen were black. Mr Marega was awarded 4,500 Euro in damages and SOS-Racism received a further 2,300 Euro. Example of disability discrimination A company dismissal a warehouse operator who has been proved to be stealing items at regular intervals. Britain's most senior military officer has attacked proposals for disabled people to be allowed to join the armed forces. Under European proposals, disabled people will be able to join up for non-combat roles in the military. But Chief of the Defence Staff, General Sir Charles Guthrie dismissed the idea, as "ill-conceived" and said that any soldier had to be ready to fight Badly designed buildings and patronising staffs are still discriminating against disabled people despite new laws, according to a new report. Disability charity Scope says disabled people feel barred from many shops, pubs, banks, leisure centres and cinemas because of obstacles such as steps and stairs. The charity's New Left out survey of 500 UK businesses revealed that three-quarters posed at least one entry problem for disabled people. Source: BBC news Unit 1 how a business works 1 michael ireland ...read more.