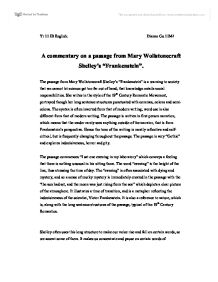 A commentary on a passage from Mary Wollstonecraft Shelley's Frankenstein.

Yr 11 IB English: Dianna Gu 11M4 A commentary on a passage from Mary Wollstonecraft Shelley's "Frankenstein". The passage from Mary Wollstonecraft Shelley's "Frankenstein" is a warning to society that we cannot let science get too far out of hand; that knowledge entails social responsibilities. She writes in the style of the 19th Century Romantic Movement, portrayed though her long sentence structures punctuated with commas, colons and semi-colons. The syntax is often inverted from that of modern writing; word use is also different from that of modern writing. The passage is written in first person narration, which means that the reader rarely sees anything outside of the narrator, that is from Frankenstein's perspective. Hence the tone of the writing is mostly reflective and self-critical, but is frequently changing throughout the passage. The passage is very "Gothic" and explores indecisiveness, horror and pity. The passage commences "I sat one evening in my laboratory" which conveys a feeling that there is nothing unusual in his sitting there. The word "evening" is the height of the line, thus stressing the time of day. The "evening" is often associated with dying and mystery, and so a sense of murky mystery is immediately created in the passage with the "the sun had set, and the moon was just rising from the sea" which depicts a clear picture of the atmosphere. ...read more.

- is Frankenstein's consideration for the fact that the two monsters might have a loathing for each other. This view is probably originating from 19th century social belief that the female's main function was to look attractive and be obedient. "She also might turn with disgust from him to the superior beauty of man" is written in, what is to us an arrogant tone, as we feel that Frankenstein is much too biased towards "man", although voicing the general convention of the time that humans were the peak of creation. Thus, we feel even more pity for the monster. In a way, this is once again Shelley's way of reflecting society's view of women in her time. Women, like the monster created, were lonely, helpless and had no power. The monster has no choice for a mate other than another of his kind, a kind whose appearance he finds horrible. He is helpless. Frankenstein also suggests that "she might quit him, and he be again alone, exasperated by the fresh provocation of being deserted by one of his own species." This suggests that the monster is destined to be alone, deserted by even his own kind, simply because of his appearance. ...read more.

By howling, he is reduced to being almost an animal. The fact that he is howling with revenge implies that he has not yet been defeated, and Frankenstein has perhaps secured his own downfall. As well, the device of alliteration is evident here: the two 'd's in "devilish despair" emphasising the plight of the monster. The fifth paragraph switches back into a tone of reflection. He speaks of never resuming his labours again, making a "solemn vow". From this we see the absolute remorse Frankenstein feels in his heart for creating the first monster, as well as his sense of absolute helplessness. The next paragraph is a contrast to the rest of the passage. It is written in a lighter, Romantic tone, presenting a sense of calmness and tranquillity. It is a description of nature, another trait of the 19th Century Romantics when he describes a 'few fishing vessels alone speckled the water", portraying how nature can overcome man. A sense of mystery is created as the paddling of oars and a person landing their boat near Frankenstein's house interrupts this calm. The arrival of the boat is shortly followed by the slow opening of a door, the creaking of the door suggests the slowness, which creates a sense of imminent peril. We are left with a sense of mystery, as even though we predict that it is the monster, we do not know who is at the door. ...read more.