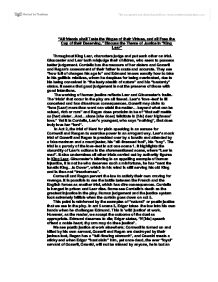 &quot;All friends shall Taste the Wages of their Virtues, and all Foes the Cup of their Deserving.&quot; Discuss the Theme of Justice in &quot;King Lear&quot;

"All friends shall Taste the Wages of their Virtues, and all Foes the Cup of their Deserving." Discuss the Theme of Justice in "King Lear" Throughout King Lear, characters judge and put each other on trial. Gloucester and Lear both misjudge their children, who seem to possess better judgement. Cordelia has the measure of her sisters and Goneril and Regan's assessment of their father is acute and accurate. They see "how full of changes his age is" and Edmund knows exactly how to take in his gullible relatives, whom he despises for being overlooked, due to his being conceived in "the lusty stealth of nature" and his "bastardy" status. It seems that good judgement is not the preserve of those with good intentions. The working of human justice reflects Lear and Gloucester's faults. The 'trials' that occur in the play are all flawed. Lear's 'love-test' is ill conceived and has disastrous consequences. Goneril may claim to "love [Lear] more than word can wield the matter... ...read more.

It is possible to see the battle between the French and the English forces as another trial, which has dire consequences. Cordelia is hanged in prison and Lear dies. Some see Cordelia's death as the greatest injustice in the play. Human judgement and the justice system look extremely fallible when the curtain goes down on act 5. This point is reinforced by the examples of "natural" or poetic justice that we see in the play. In act 5 scene 3, Edgar takes the law into his own hands when he challenges Edmund. This is 'wild justice' at work. However, as the reader, we accept the outcome of the duel as appropriate. Edmund deserves to die; Edgar states, "if [his] speech offend a noble heart, thy arm may do thee justice". We see poetic justice at work elsewhere; Cornwall is turned on and killed by his own servant, Goneril and Regan are destroyed by their jealous lust, Regan has a "full-flowing stomach", and Oswald meats a sticky end when Edgar "hast slain" him, yet once dead, the ever "loyal" ...read more.

We can now ask, is this not justice enough? Lear has now lost all that originally was dear to him, and all that he was taught was dear to him during his moments of madness. Although his judgement has been restores, it is too late for the monarch Lear. King Lear is also concerned with social justice. Lear and Gloucester both consider this topic carefully and seem to reach radical conclusions. Gloucester calls upon the heavens to distribute wealth more evenly; while Lear considers the lives of "poor naked wretches" he paid so little attention to. In Act 4, Lear rages against corrupt members of the judiciary and seems to sneer at himself when he says "a dog's obeyed in office". At the end of the play we are presented with two new agents of justice, Albany, and Edgar. We accept the justice of their actions in Act 5 Scene 3. But human judgement still looks faulty. Albany has been overwhelmed by events and Edgar's bitter words about Gloucester's death seem callous. Surely nobody in King Lear is morally impeccable? Perhaps Shakespeare wants us to remain uncomfortable about justice. ...read more.