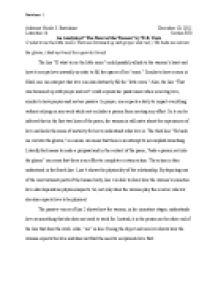 An Analysis of &quot;The Heart of Woman&quot; by W.B. Yeats

An Analysis of ?The Heart of the Woman? by W.B. Yeats O what to me the little room / That was brimmed up with prayer and rest; / He bade me out into the gloom, / And my breast lies upon his breast. ????????The line ?O what to me the little room? could possibly allude to the woman?s heart and how it accepts love inwardly in order to fill the spaces of her ?room.? Similar to how a room is filled, one can interpret that love can also abstractly fill the ?little room.? Also, the line ?That was brimmed up with prayer and rest? could express her passiveness when receiving love, similar to how prayers and rest are passive. In prayer, one expects a deity to impart everything without relying on any work while rest excludes a person from exerting any effort. So it can be inferred that in the first two lines of the poem, the woman is still na?ve about the experiences of love and lacks the sense of maturity for her to understand what love is. ...read more.

The use of the linking verb ?was? shows that this idea of her ?mother?s care? was an idea of the past, that she was previously nurtured in a homey environment but no longer needs it. Though there is a sense of detachment, the appreciation for it is still there but there is also an understanding that it is no longer a necessity to be provided. The third and fourth stanza emphasizes the woman as a viable substitute as an instrument to provide the same feeling of sanctuary as ?my mother?s care.? The use of hair instead of any other body part stresses the ability of the woman to provide the same kind of care. Hair is a powerful asset to a woman and in this poem the persona mentions its capability to protect the ?us? from a ?bitter storm.? ??Shadowy blossom? may have highlighted that the woman is experiencing various kinds of growth that is faintly perceivable. She shows that this growth, which could be emotionally, makes her readily capable to impart the same nurturing and love to her partner. ...read more.

Presently, she learns how to express love in just the right amount. She won?t go as far as loving a person that the other end will keep on relying on her, similar to how one relies on others for life, as well as not love someone to the point that the other end is suffocating and feels strangled in the relationship. Compared to the fourth line of the first stanza, the exchange of affection is now more mature and in a sense deeper because of the use of the words ?heart? replacing the words ?breast.? The context of the action is still there, however, the change of words shows the growth of the woman. The fourth line of the final stanza literally presents passionate kissing but the use of the word ?mixed? shows the oneness of the woman with her partner. Similar to how mixing is used to form one substance; their breaths are mixed in order to show that they are one in emotion for each other. Overall, the poem expresses the growth of the way the woman loves. It presents three stages, arranged chronically by stanzas, of how a woman perceives and expresses love: immaturity, overly strong-willed, and finally a matured understanding of the abstract concept. ...read more.