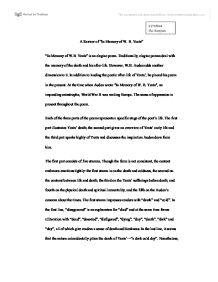 A Review of In Memory of W. B. Yeats

A Review of "In Memory of W. B. Yeats" "In Memory of W.B. Yeats" is an elegiac poem. Traditionally, elegiac poems deal with the memory of the death and his after-life. However, W.H. Auden adds another dimension to it. In addition to lauding the poetic after-life of Yeats', he placed his poem in the present. At the time when Auden wrote "In Memory of W. B. Yeats", an impending catastrophe, World War II was waiting Europe. The sense of oppression is present throughout the poem. Each of the three parts of the poem represents a specific stage of the poet's life. The first part illustrates Yeats' death; the second part gives an overview of Yeats' early life and the third part speaks highly of Yeats and discusses the inspiration Auden drew from him. The first part consists of five stanzas. Though the form is not consistent, the content embraces emotions tightly: the first stanza is on the death and coldness, the second on the contrast between life and death, the third on the Yeats' sufferings before death, and fourth on the physical death and spiritual immortality, and the fifth on the Auden's concern about the times. ...read more.

The meanings of Yeats' poems will be forgotten or lost due to the reason that only a few thousand people will consider the day of Yeats' death as "slightly unusual", which is an understatement. The last two lines is the repetition of the last two lines of the first stanza, which gives emphasis to the grief and pity people feel for Yeats' death. As for the second part, it summarizes the transition period of Yeats and digs deep into the nature of poetry. The form of the poem becomes more unified. The metrical form is iambic hexameter and the rhyming scheme is more regular, which indicates Yeats' poetic techniques are growing more refined. This stanza reveals to the readers the reasons for which Yeats wrote poems and arouses readers' sympathy for them. The conflicts between Ireland and England placed Yeats in a miserable situation, which forced him to write poetry. Nevertheless, no matter how beautiful his poems are, they are useless, from Auden's point of view, in that they are not able to change the reality. Even if poems cannot contribute to the happenings of any events, "it survives ?In the valley of its making". ...read more.

It paints a vivid picture of Auden, out of respect, bowing his head towards Yeats. These three stanzas elaborate a belief that the poet cannot change the world but he can persist in his singing of the world and create his own world as beautiful as the vineyard (Auden alluded to the stories of Genesis in Bible) however terrible the situation is. The production of literary arts can counteract its unfavorable surroundings. Auden contended that reality was unsuccessful and distressful. A better world will come into being. Nonetheless, it has to survive the "desert" and to praise "frozen sea". In the last two lines, Auden juxtaposed "prison" and "free", calling the poet to "Teach the free man how to praise". The ending "inscribes" a perfect epitaph for Yeats. Moreover, Auden also expressed his wishes and determination to pursue after the perfection of his poetic techniques, considering Yeats as a benchmark. He himself also aspired to "Make a vineyard of verse". To conclude, Auden's lamentation for Yeats' death is actually the lamentation for the times. His praise for Yeats' poems is the praise for literary arts. And his reflection upon Yeats' life is a reflection on and an outlook for himself. ...read more.