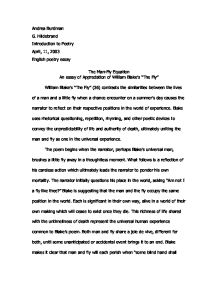 An essay of Appreciation of William Blake's &quot;The Fly&quot;

Andrea Burdman G. Hildebrand Introduction to Poetry April, 11, 2003 English poetry essay The Man-Fly Equation An essay of Appreciation of William Blake's "The Fly" William Blake's "The Fly" (36) contrasts the similarities between the lives of a man and a little fly when a chance encounter on a summer's day causes the narrator to reflect on their respective positions in the world of experience. Blake uses rhetorical questioning, repetition, rhyming, and other poetic devices to convey the unpredictability of life and authority of death, ultimately uniting the man and fly as one in the universal experience. The poem begins when the narrator, perhaps Blake's universal man, brushes a little fly away in a thoughtless moment. What follows is a reflection of his careless action which ultimately leads the narrator to ponder his own mortality. The narrator initially questions his place in the world, asking "Am not I a fly like thee?" ...read more.

Death is marked by the absence (or want) of thought. His contention is that life cannot exist without thought; a person who is alive and unthinking is already dead. By putting emphasis on mortality Blake illustrates the inevitability and unexpectedness of death for man and fly. Blake uses a method of development that draws the narrator from a literal action, brushing away the fly, to a reflection about that experience. This technique allows Blake's audience to understand the narrator's reflection from a first-hand experience. Blake makes use of rhetorical questioning in the second stanza, drawing parallels between man and fly and establishing their common experiences such as life and death, dancing, drinking and singing. According to Abrams the most important function of rhetorical questioning is to make an assertion indirectly for persuasive effect (271). "Am not I/ a fly like thee?/ Or art thou/ not a man like me?" ...read more.

Blake also uses repetition to draw parallels between thought as being a part of both life and death. This is done in the fourth stanza by using the word "thought" twice, at first comparing it to life, then to death. Just like the man and the fly are connected through life and death, life and death are connected through thought. For Blake, it is thought that causes a being (in this case the man and fly) to live; or to die in its absence. Blake uses the chance encounter of man and fly to address the mortality of each. His universal message is that life is fickle, and can be snuffed out at any moment. There is no moment like the preset to dance, drink and sing; to live each day to its fullest and enjoy "thy summer's play". Blake's "The Fly" stresses Burdman 4 the importance of experiencing, and presents it as one of the common ties that make man and fly alike. ...read more.