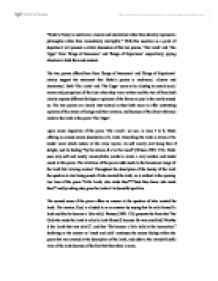 &quot;Blake's Poetry is multivocal, allusive and intertextual rather than directly expressive; philosophic rather than immediately intelligible

"Blake's Poetry is multivocal, allusive and intertextual rather than directly expressive; philosophic rather than immediately intelligible." With this assertion as a point of departure I will present a critical discussion of the two poems, 'The Lamb' and 'The Tyger' from 'Songs of Innocence' and 'Songs of Experience' respectively, paying attention to both form and content. The two poems offered here from 'Songs of Innocence' and 'Songs of Experience' clearly support the statement that Blake's poetry is multivocal, allusive and intertextual. Both 'The Lamb' and 'The Tyger' seem to be alluding to certain social norms and perceptions of the time when they were written and the two of them both clearly express different feelings or opinions of the forces at play in the world around us. The two poems are clearly inter-related as they both seem to offer contrasting opinions of the nature of beings and their creators, and because of the direct reference made to the lamb in the poem 'The Tyger'. Upon closer inspection of the poem 'The Lamb', we see, in lines 5 to 8, Blake offering an almost serene description of a lamb. Describing the lamb in terms of its tender voice which makes all the vales rejoice, its soft woolly coat being that of delight, and its feeding "by the stream & o'er the mead" (Watson 1992: 133). ...read more.

If God created all living creatures in his perfect image of himself, which is a Christian belief, then all people should be granted the same status as each other. In contrast to 'The Lamb' we find its counterpart from 'Songs of Experience' - 'The Tyger'. In this poem, as in 'The Lamb', there is a question of the "unseen power behind the tiger" (Watson 1992: 146). The difference behind the questioning in this poem is the mood that the questions create. The mood is not peaceful and serene as it is in 'The Lamb', but rather the questioning here almost gives the reader a feeling of anger and aghastness at the thought of the same creator who created the lamb creating a creature so fearful as the tiger. The continued use of the word 'dare' leaves the reader feeling as if the whole creation of the tiger was a shameful act. Lines such as "On what wings dare he aspire", "what the hand, dare seize the fire", and "what immortal hand or eye/dare frame thy fearful symmetry" all help to create and complement this feeling. From the following verse the reader is left with the sense that even the stars were angered and upset at the creation of the tiger: When the stars threw down their spears, And water'd heaven with their tears, Did he smile his work to see? ...read more.

In 'The Lamb' Blake is perhaps expressing a child like innocence at the thought of living life in the perfect image that God has created for man. Moving on to 'The Tyger' Blake might be showing us that with experience our views of the world around us and the way that we exist within it are much harsher than what a child would dream it to be. These two poems are both written in the form of a lyric and are done so in order for Blake to express his immediate thoughts and feelings at a specific point in time. The fairly short length of the poems and the simple rhyming schemes, coupled with the contrasting choice of words in each respective poem add to the immediate effect of the feelings, images and moods created within the poems. The inter-relatedness of the two poems gives the reader a very complete feeling of the mood surrounding the time when they were written. Blake's poetry is clearly philosophic in all concerns and cannot be seen as directly expressive or immediately intelligible. The allusiveness and inter-relatedness of his poetry is clearly expressed in the two poems 'The Lamb' and 'the Tyger' form 'Songs of Innocence' and 'Songs of Experience' respectively. These two poems present two contrasting views of a world and a creator that we are all inextricably tied to but all experience under different social and political conditions and are all able to understand and experience completely differently. ...read more.