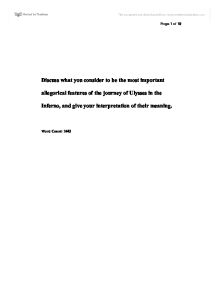 Dantes Divine Comedy. Discuss what you consider to be the most important allegorical features of the journey of Ulysses in the Inferno, and give your interpretation of their meaning.

Discuss what you consider to be the most important allegorical features of the journey of Ulysses in the Inferno, and give your interpretation of their meaning. Word Count: 2443 Ulysses represents great ambiguity for Dante both as the pilgrim and as the poet. Is he the hero of Greek Cicero and Seneca whose love of knowledge, in Dante's adaptation, desires to go beyond all earthly boundaries in order to seek human knowledge? On the other hand is he the Ulysses of Latin Virgil and Ovid, the man of cunning and manipulation, who seeks knowledge of the external world and discards all others and more importantly discards all virtue? Canto 26 is set among the eighth ditch of the eighth circle of Hell, a scene in which the sinners are punished in flames that burn inward, and the central feature is a 'cloven-crested flame'1 which embodies the shades of Ulysses and Diomed. In all of this Dante creates some of the most complex and intriguing allegory in the whole of the Divine Comedy. The significance of this allegory is based upon the interpretation of Ulysses' journey. To understand the allegories you first must understand the interpretations. To understand the interpretations you first must understand the role of Dante. This preface, to the discussion of the most important allegorical features, will outline Dante's duality, and the two main competing interpretations of Ulysses' journey - it will set the context. ...read more.

But no man can tame the tongue. It is an unruly evil, full of deadly poison...'5 In this verse the idea that the tongue is untameable by man and that its unremitting use is inevitably poisonous is reflected in the character of Ulysses. This identifiable connection to canto 26 is referring to Ulysses and his gift of intellect and rhetoric, so that in the end it eventually leads to the death of himself and of the crew who were seduced by his exalted words. The sin which is founded on the tongue of Ulysses expresses itself in other ways in this canto, in as much, as he has also silenced his partner Diomed and the crew of his ship6. Dante the poet therefore is criticising the use of intellect without virtue as it denies people their voice and manipulates them to carry out one's will. In my opinion, this allegory and 'the purpose of Dante's visit to the eighth bolgia is for him and us to learn that the use of intelligence unrestrained by virtue is self-destructive'7. This can be seen from a purely biblical sense - as man has been endowed with gifts from God - and Ulysses was given the gift of a brilliant intellect. Ulysses, whether through tacit or expressed choice, chose to act without virtue - and so the 'misuse of mental powers runs against the will of God8' which in part leads to his demise. ...read more.

With this in mind, Ulysses in his speech about his journey says 'Wheeling our stern against the morning sun, we made our oars our wings in crazy flight'14 - this crazy flight, the story of Elijah's journey, and the Platonian allegory all show that it is here where Ulysses gives ground to the sinful horse and leads his ship to damnation. In finishing this allegory it is the horses, one being of virtue and the other of sin, that pull the soul towards its end, and so it is in the hands of the charioteer to take charge and steer it in the right direction. Elijah to the poet is therefore the exemplification of the virtuousness of humanity, and while Ulysses exemplifies the sinfulness. In conclusion, these three allegories diversify the meaning that Dante the poet has of Ulysses' journey. The allegory of the tongues of fire and the horses of the soul both strengthen the interpretation that Dante inevitably condemns Ulysses. While on the other hand the allegory of introspection enhances Dante's admiration for the love and the pursuit of knowledge - that Ulysses' characterises although he condemns him the form of the three reasons as stated by Virgil. The allegorical features within the Divine Comedy, then, have infinite meanings and infinite interpretations because only in this ambiguity can Dante get the audience to glimpse an aspect of their own interpretation - and in doing so, get to glimpse an aspect of themselves. ...read more.