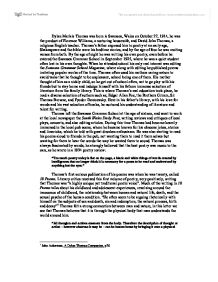 Dylan Marlais Thomas was born is Swansea, Wales on October 27, 1914, he was the product of Florence Williams, a nurturing housewife, and David John Thomas, a religious English teacher. Thomas's father exposed him to poetry at an early age, Shakespeare and the bible were his bedtime stories, and by the age of four he was reciting verses from both. By the age of eight he was writing his own poetry, even before he entered the Swansea Grammar School in September 1925, where he was a quiet student often lost in his own thoughts. When he attended school his only real interest was editing the Swansea Grammar School Magazine, where along with editing he published poems imitating popular works of the time. Thomas often used his mothers caring nature to avoid tasks that he thought to be unpleasant, school being one of them. His mother thought of him as a sickly child, so he got out of school often, not to go play with his friends but to stay home and indulge himself with his fathers immense selection of literature from the family library. This is where Thomas's real education took place, he read a diverse selection of authors such as; Edgar Allan Poe, the Brothers Grimm, Sir Thomas Browne, and Fyodor Dostoevsky. Here in his father's library, with his love for words and his vast selection of books, he nurtured his understanding of literature and talent for writing. Thomas left the Swansea Grammar School at the age of sixteen, and went to work at the local newspaper the South Wales Daily Post, writing reviews and critiques of local plays, concerts, and also editing articles. During this time Thomas had become heavily immersed in the local pub scene, where he became known for his obscene jokes, stories and limericks, which he told with great drunken enthusiasm. He was also starting to read his poems aloud to friends in the pub, not wanting them to read it them selves but wanting for them to hear the words the way he wanted them to sound. ...read more.

Frequent letters between the two made them feel quite close, and when they finally did meet in February 1934, they spent a night together drinking at Ms. Johnson's house, feeling instantly comfortable around each other. Thomas and Johnson held a steady relationship with one another for two years (inspiring the sexual references often found the 18 Poems) until it finally ended when Johnson became tired of the thoughtless and unreliable side of Thomas. Thomas was now living in London pursuing publishers, when in December 1934, 18 Poems was finally published. Sexuality is a major theme that is explored by Dylan Thomas throughout his works. We see this theme emerge in such works as: 'If I Were Tickled By The Rub Of Love', 'My Hero Bares His Nerves', 'Light Breaks Where No Sun Shines', 'early notebooks', and 'Twenty-four Years'. Many of Thomas's early poems revolve around sexual themes, either in a romantic sense or directly sexual. An early poem entitled 'Cabaret' written when Thomas was just sixteen years old shows the romantic sexuality of Thomas's writing: I poor romantic, held her heel Upon the island of my palm, And saw towards her tiny face Going her glistering calves that minute. There was a purpose in her pointed foot; Her thighs and underclothes were sweet, And drew my spiral breath... The band was playing on the balcony. In this poem we see the romantic sexuality of Dylan Thomas, where he is with a girl and he is explaining the experience and feeling that he sees in her pleasure. He is focused on her feelings, rather than of his own as seen in 'My Hero Bares His Nerves': My hero bares his nerves along my wrist That rules from wrist to shoulder, Unpacks the head that, like a sleepy ghost, Leans on my mortal ruler, The proud spine spurning turn and twist. This is a poem taken from 18 Poems; at first glance it is about internal growth and confidence, or so I thought. ...read more.

Though they sink through the sea they shall rise again; Though lovers be lost love shall not; And death shall have no dominion. In this passage we see Thomas's strong belief in man being unified with nature. In these lines we understand that though people may seem to be dead 'though they sink through the sea' they will 'rise again' meaning that they will live on through their original womb; the earth. Also the reference to spirit being separate from the body 'though lovers be lost love shall not' is seen in this line where the reader is to understand that eternal life exists in all of us and death is just the continuation of mortal life through nature, as seen in the last stanza of the poem 'light Breaks Where No Sun Shines' where we see poetic symbolism of spirit living on through nature: Light breaks on secret lots, On tips of thought where thoughts smell in the rain; When logics die, The secret of the soil grows through the eye, And blood jumps in the sun; Above the waste allotments the dawn halts. On the contrary, the poem 'Do Not Go Gently Into That Good Night' written in 1951 for his dieing father, shows Thomas's anger toward death: Do not go gentle into that good night, Old age should burn and rave at close of day; Rage, rage against the dying of the light. In the first line of the poem Thomas is protesting death saying that one should 'rage, rage against the dying of the light', fight to stay alive until the very end, this interpretation taken from the title/first line of the poem where the phrase 'good night' is used as a symbol for death. The death of his father was a traumatizing experience for Thomas, and when an already heavy drinker took even more comfort with his lips to the bottle. Thomas eventually died of this comfort when on November 9th, 1953, Thomas died of an alcohol-induced coma at the age of 39. 1 John Ackerman, A Dylan Thomas Companion, p76 2 Thomas, Collected Letters, p. 39 ...read more.