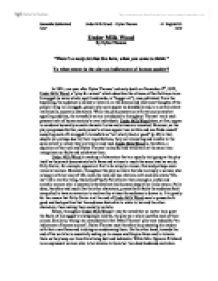 Under Milk Wood By Dylan Thomas - &quot;There's a nasty lot that live here, when you come to think.&quot; To what extent is the play an indictment of human society?

Under Milk Wood By Dylan Thomas "There's a nasty lot that live here, when you come to think." To what extent is the play an indictment of human society? In 1954, one year after Dylan Thomas' untimely death on November 9th, 1953, Under Milk Wood, a "play for voices" which describes the citizens of the fictitious town Llareggub (a name which, spelt backwards, is "bugger all"), was published. From the beginning, the audience is called to listen in on the dreams and innermost thoughts of the people living in Llareggub, people who soon appear as dreadfully and, to a certain extent realistically, eccentric characters. While the play presents us with various somewhat appalling oddities, the townsfolk we are introduced to throughout Thomas' work each possess traits of human society's own individuals. Under Milk Wood does, at first, appear to condemn humanity as each character's sins and crimes are revealed. However, as the play progresses further, each person's crimes appear less terrible and one finds oneself accepting each of Llareggub's townsfolk as "not wholly bad or good" (p.18) in that, despite (or perhaps due to) ...read more.

On the other hand, towards the end of his work he is essentially asking us to excuse and forgive flaws and to tolerate them as they keep our lives from being dull and lacklustre. While Mrs. Ogmore-Pritchard is an unpleasant woman who in her dreams tortures her two dead husbands and when awake rejects a boarder for her bed and breakfast claiming "I don't want persons in my nice clean rooms breathing all over the chairs (...) and putting their feet on my carpets and sneezing on my china and sleeping in my sheets..." (p.10), she is essentially accepted by the rest of Llareggub's eccentric inhabitants and we may (despite her less commendable traits) find ourselves regarding her warmly as she is evidently fond of the two husbands she torments so much. Therefore, although Dylan Thomas does in fact criticize society's behaviour, he also celebrates it for being so wonderfully senseless, interesting and in many ways amusing. Dylan Thomas further explores the depiction of society in the people of Llareggub through Captain Cat, the very controversial central character of Under Milk Wood. ...read more.

One may be of the opinion that by this line Dylan Thomas meant to make the audience consider the story's various characters and their flaws. After all, despite their sins, Thomas' characters are evidently quite alike (in at least some way) to most individuals of the audience. Although Thomas is, therefore, critical of our faults, he does not wish to attack them. Thomas appears to be of the opinion that one should be forgiven for one's faults and thus accepted and loved for them, as is the case with Polly Garter, whom we find ourselves considering with a degree of pity, tenderness and affection. In conclusion, the play Under Milk Wood may, indeed, be considered an indictment of society. However, one must consider that, although Dylan Thomas criticizes his characters throughout, the play as a whole recognizes that it is important to forgive one of one's flaws. The audience may therefore be inclined to believe that Under Milk Wood is simply a depiction of reality and thus displays the flaws and wonders of Llareggub's townspeople; both of which are celebrated by the play overall. ...read more.