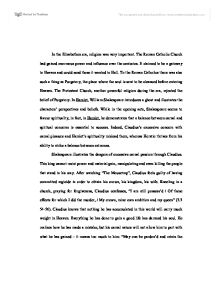 In the Elizabethen era, religion was very important. The Roman Catholic Church had gained enormous power and influence over the centuries. It claimed to be a gateway to Heaven and could send those it wanted to Hell. To the Roman Catholics there was also such a thing as Purgatory, the place where the soul is sent to be cleansed before entering Heaven. The Protestant Church, another powerful religion during the era, rejected the belief of Purgatory. In Hamlet, William Shakespeare introduces a ghost and illustrates the characters' perspectives and beliefs. While in the opening acts, Shakespeare seems to favour spirituality, in fact, in Hamlet, he demonstrates that a balance between carnal and spiritual concerns is essential to success. Indeed, Claudius's excessive concern with carnal pleasure and Hamlet's spirituality mislead them, whereas Horatio thrives from his ability to strike a balance between extremes. Shakespeare illustrates the dangers of excessive carnal passion through Claudius. This king cannot resist power and material gain, manipulating and even killing the people that stand in his way. After watching "The Mousetrap", Claudius feels guilty of having committed regicide in order to obtain his crown, his kingdom, his wife. Kneeling in a church, praying for forgiveness, Claudius confesses, "I am still possess'd / Of those effects for which I did the murder, / My crown, mine own ambition and my queen" (3.3 54-56). Claudius knows that nothing he has accumulated in this world will carry much weight in Heaven. ...read more.

At this point, Hamlet is very resentful towards Gertrude and Claudius because of their sudden relationship. Angered, Hamlet wishes "That the Everlasting had not fix'd / His canon 'gainst self-slaughter!" (1.2 131-32). Hamlet does not give in to suicide because he knows it is against God's will. This is typical of Hamlet, he does care for his soul and is worried of afterlife. When the Hamlet Sr.'s ghost appears, Hamlet wonders if it's sent from heaven or hell. "O all you host of heaven! O earth!" Hamlet concludes when he learns of purgatory, "What else? / Shall I couple hell?" (1.5 93-94). When Hamlet explains the notion of purgatory to Horatio, he proclaims, "There are more things in heaven and earth, Horatio, / Than are dreamt of in our philosophy" (1.4 167-68). Hamlet has opened his mind and realizes that he has more to learn about life and afterlife. This is peculiar because at this moment Hamlet becomes more spiritual then philosophical, agreeing that there are things that you cannot see that do exist. He accepts that there is more in life than what the Bible tells us. Half way through the play, Hamlet finally realizes how much time has passed and how little he's done to revenge his father's death. "That I, the son of the dear murder'd, / Prompted to my revenge by heaven and hell," Hamlet recapitulates, and he concludes: "Must, like a whore, unpack my heart with words" (2.2 281-83). ...read more.

This is particular because Horatio does believe in heaven or hell and is worried about his friend's soul. Later in the play, when Hamlet accepts to duel with Laertes, Horatio is worried. He tries to convince Hamlet not to proceed with the match: "If you're mind dislike anything, obey it" Horatio pleads (5.2 208). Here Horatio is being more carnal; he wants Hamlet to listen to his instincts - to do what his mind is telling him at this very moment. Hamlet does not listen, and while dueling Laertes, he is defeated and poisoned. After Hamlet's death, Horatio pleads: "Flights of angels sing thee to thy rest!" (5.2 353). Again, we see Horatio's spiritual side, asking God to send Hamlet to heaven. Through Horatio's character, Shakespeare demonstrates that a balance between carnal and spiritual is essential to success. In sum, Shakespeare outstandingly demonstrates how excessive passions can mislead, and how balance is the key to achievement. In Hamlet, Shakespeare demonstrates that a balance is needed not only in carnal and spiritual matters, but in others such as: passion and reason, youth and authority, duty and personal agenda, and so on. Through the struggles of many characters in the play we see these matters and being excessive can be misleading. Is there really a way to balance all of these concerns? "What a piece of work is a man!" Hamlet expresses (2.2 303). Shakespeare makes the audience realize, through his work, that there are no perfect people in the world, everyone has flaws; but the ones who succeed learn to overcome them. ?? ?? ?? ?? 6 ...read more.