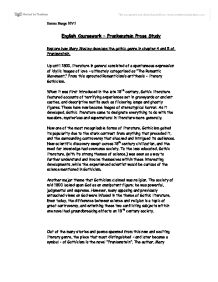 Explore how Mary Shelley develops the gothic genre in chapter 4 and 5 of Frankenstein.

English Coursework - Frankenstein Prose Study Explore how Mary Shelley develops the gothic genre in chapter 4 and 5 of Frankenstein. Up until 1800, literature in general consisted of a spontaneous expression of idyllic images of love - ultimately categorised as "The Romantic Movement." From this sprouted Romanticism's antithesis - literary Gothicism. When it was first introduced in the late 18th century, Gothic literature featured accounts of terrifying experiences set in graveyards or ancient castles, and descriptive motifs such as flickering lamps and ghostly figures. These have now become images of stereotypical horror. As it developed, Gothic literature came to designate everything to do with the macabre, mysterious and supernatural in literature more generally. Now one of the most recognisable forms of literature, Gothicism gained its popularity due to the stark contrast from anything that preceded it, and the surrounding controversy that shocked and intrigued its audiences. New scientific discovery swept across 18th century civilization, and the need for knowledge had overcome society. ...read more.

Chapters 4 and 5 are particularly strong in these subjects. The first of these two chapters sees Frankenstein becoming more involved in studies at the university, with the aid of Waldman, his newly discovered friend. Without one visit to his family in two years, his experiments at the university take possession of his life, so much so that he begins to venture further into new, and more controversial fields of study. This chapter exemplifies Gothicism's strong themes of death and decay, as Frankenstein's surroundings change from a loving home to a charnel house, and he is no longer deterred by darkness or superstition. His excitement at the thought of bringing a lifeless corpse into the world greatly disturbs the reader, preparing him for the climax that follows. Frankenstein's realization that his actions were deeply immoral is shown in chapter 5. However, it is too late to change his ways, leaving Frankenstein to lament that the charm of a cherished dream vanished as he beheld the "horrid" sight of the creature. ...read more.

While Shelley assigns the desolate weather to Frankenstein's own despondent sense of mind, (which is described using words like "anxiety" and "agony",) she uses light to symbolise the morsel of hope also recurrent throughout the pain-stricken story, for example, "...by the glimmer of the half-extinguished light...." The inclusion of such light-related phrases is used in situations where Doctor Frankenstein has regained his hope after a loss. In this case, Frankenstein's monster begins to move after he had given up all hope of the success of his project. The theme of Gothicism is further intensified in paragraph 2.A stark contrast between beauty and ugliness is emphasized, with the description of the monsters features: "his hair was a lustrous black, and flowing; his teeth of pearly whiteness" clashing with uncompromising imagery of its form: "His yellow skin scarcely covered the work of muscles and arteries beneath". Perhaps in reality the creature was beautiful, but Frankenstein looked upon his decision to create it as unpalatable? As the chapter progresses, another poignant topic is introduced - that of aberrant ungodliness. ...read more.