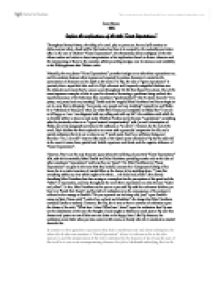 Explore the implications of the title &quot;Great Expectations&quot;.

Explore the implications of the title "Great Expectations" Throughout literary history, the titling of a novel, play or poem can, has and will continue to define not just what a book will be filed under, but how it is received by the readership and critics alike. In the case of Dickens' "Great Expectations", the thematically driven ambiguity of the title allows readers and critics to draw interpretations of its implications based on theme, character and the interweaving of these in the narrative, whilst providing intrigue over its relevance and suitability to the Bildungsroman that Dickens crafts. Naturally, the very phrase "Great Expectations" provokes intrigue as to what these expectations are, and the variation between what is great, and expected by various characters is central to the presentation of character and its depth in the novel. For Pip, the idea of "great expectations" is precisely that, a superficial idea, and it is Pip's vehement and frequently misguided idealism over the obstacles and events that he comes across throughout his life that shapes his actions. One of the most important examples of this is upon his dreams of becoming a gentleman being realised- the superficial picture of the behaviour that constitutes "gentlemanliness" that he draws from the "very pretty, very proud and very insulting" Estella and the vengeful Miss Havisham lead him to begin to act in a way that is ultimately, "very pretty, very proud and very insulting" towards Joe and Biddy- he is "ashamed of him (Joe)" when Joe visits Satis House, and complains to Biddy that "I am not at all happy as I am. ...read more.

However, it is interesting that the greatest irony of her character is never realised and banished from his mind by Pip- even when he learns that his star, that all he has romantically aspired to is in fact one of the lowest of the social lows, born to a murderess and a convict, he does not alter from his cause to be with her, the book ending with the line "I saw no shadow of another parting from her", even the happier of Dickens' two endings still portraying the naivety in character and irony in determination Pip displays for the length of the novel, from this closing line filled with a yearning desire of unattainable companionship, back to the opening of the novel, which sees Pip describing how he drew foolish conclusions from gravestones as to their moral nature and ways, just as Pip draws foolish conclusions of the grandeur and beauty of fortune from the opulent surroundings of Satis House. This ironic quality to the novel, and the challenge and social damning of the concept of superficial idealism is one that runs throughout the novel, and is especially relevant in conjunction with the frequent doubling up of portrayals of character and theme. Thematically, the ambiguity irony of the title of "Great Expectations" means that it can be referenced in many themes reflected in the book- monetary expectations, romantic aspirations and moral fulfilment to name but a few, and as a consequence provoking thoughts over what "Great Expectations" is supposed to mean and ultimately will come to mean throughout the course of the novel. ...read more.

making him uncomfortable, as his hat, a metaphor for the character that he has to adopt as a result of Pip's unrelenting and ruthless climb, or fall as it can be interpreted, "ever afterwards falling off at intervals". However, despite this he always comes through when required, socially and morally when Pip returns to see him eleven years after effectively abandoning him "We hoped he might grow a little bit like you" in referring to "little Pip", and antithetically perhaps, but equally reflecting upon his kind character, economically when he pays off Pip's debts. This again promotes an idea of uncertainty and incongruousness in the title- these forceful "Great Expectations" are in fact more superficial, and can be "bent into a better shape" in a way that is perceivably "in strength and in weakness". In conclusion, the implication of the title "Great Expectations" is one relating to idealism and perception, as is the entirety of the novel. The title itself is grandiose and powerful, and presents the reader with an initial view of a book about class, money, and good fortune. However, through Dickens' varied narrative perception and use of ironies, the title is superficially seen to lose suitability, as the narrative becomes one more suited to a title closer to "Eminent Mediocrities" than anything else. However, this is where the title is so suitable- the narrative itself challenges the title's idealistic and ironic nature, and provides the implication that things are not what they seem- as Dickens portrays with his interpretations of class against status, money against fortune, and narrative against title. ?? ?? ?? ?? James Hansen 12BG ...read more.