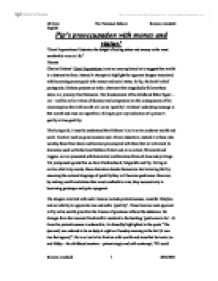 &quot;Great Expectations Illustrates the danger of seeing status and money as the most worthwhile aims in life&quot; - Discuss.

Pip's preoccupation with money and status! "Great Expectations Illustrates the danger of seeing status and money as the most worthwhile aims in life." Discuss Charles Dickens' Great Expectations is not so uncomplicated as to suggest that wealth is a destructive force. Instead it attempts to highlight the apparent dangers associated with becoming preoccupied with money and social status. In Pip, the book's chief protagonist, Dickens presents us with a character that misguidedly follows these ideals in a journey of self delusion. The abandonment of his childhood father figure -Joe - and his earlier virtues of decency and compassion are the consequences of his misconception that with wealth will come 'gentility'. Dickens' underlying message is that wealth and class are superficial, failing to give any indication of a person's quality or true gentility. This being said, it must be understood that Dickens' aim is not to condemn wealth and social 'niceties' such as good manners and a formal education, instead it is those who worship these false ideals and become preoccupied with them that are criticized. ...read more.

He is so lost in his fixation with wealth and class that he treats Joe and Biddy - his childhood mentors - patronizingly and with contempt; "If I could have kept (Joe) away by paying him money I certainly would have." This leads him to turn his back on these noble characters, removing their wisdom and decency from his life, leaving him only with his wasteful and highly pretentious lifestyle. At one stage Pip himself admits "(the effect of my expectations) influenced my own character, I disguised from my recognition as much as possible, but I knew very well that it was not all good." In highlighting these dangers, Dickens preaches that social status and external appearances are doubtful measures of a person's true quality. Pip's journey clearly exemplifies this message, being most repugnant at the hight of his expectations yet being most worthy when he has lost everything. Supposed gentlemen such as Pumblechook, Drummle and Compeyson who mock the false surface of gentility but are really hideous and unworthy characters are further variations on this theme. ...read more.

By making these characters the moral centre of the book Dickens is able to highlight the greater importance of such values over wealth in determining the quality of a person. Even the 'darker' characters of the book such as Miss Havisham and Mrs Joe are able to understand this (though it comes far too late), with Miss Havisham asking for Pip's forgiveness "Prey if you could ever right under my name 'I forgive her' ... prey do it." and Mrs Joe's final words "Joe...Pardon...Pip." Clearly the moral of the novel is based on the importance of love and compassion over wealth and class. Dickens, therefore, argues that money and social status fail to act as indicators of a persons true worth. Instead it is values such as compassion and the ability to love that define their gentility. Although Pip in his journey misguidedly believes that his re-invention would lead to bettering himself, he is eventually able to realize what truly counts are the virtues of love, compassion and decency. Mr Cole The Peninsula School Kamran Jamshidi English Kamran Jamshidi 1 8/05/2007 ...read more.