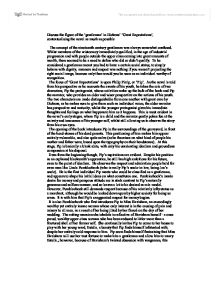 Discuss the figure of the 'gentleman' in Dickens' 'Great Expectations', contextualising the novel as much as possible.

Discuss the figure of the 'gentleman' in Dickens' 'Great Expectations', contextualising the novel as much as possible The concept of the nineteenth century gentleman was always somewhat confused. Whilst members of the aristocracy immediately qualified, in the age of industrial progression and with people outside the upper class coming into great amounts of wealth, there seemed to be a need to define who did or didn't qualify. To be considered a gentleman meant you had to have a certain social status; to simply behave with dignity, manners and respect was nothing if you weren't projecting the right social image, because only then would you be seen as an individual worthy of recognition. The focus of 'Great Expectations' is upon Philip Pirrip, or 'Pip'. As the novel is told from his perspective as he recounts the events of his youth, he takes the role of two characters; Pip the protagonist, whose activities make up the bulk of the book and Pip the narrator, who provides an older and wiser perspective on the actions of his youth. The two characters are made distinguishable from one another with great care by Dickens, as he makes sure to give them each an individual voice; the older narrator has perspective and maturity, whilst the younger protagonist gives his immediate thoughts and feelings on what happens to him as it happens. This is most evident in the novel's early stages, where Pip is a child and the narrator gently pokes fun at the naivety and innocence of his younger self, whilst still allowing us to observe the story from his own eyes. ...read more.

Acting as a stern matriarchal figure to both Pip and her husband, she is dissatisfied with her position as a blacksmith's wife, and seeks desperately to improve her social station (in keeping with one of the primary themes of the book). These attitudes are passed onto Pip, as she encourages him to essentially prostitute himself to Miss Havisham, pushing him not only out of the home but also into a materialistic mindset, where character and generosity take second place to wealth and influence. It is at Miss Havisham's decrepit mansion that Pip meets Estella, Havisham's adopted daughter. Estella's role in the book is to act as an incentive and catalyst for Pip to become a gentleman, so he will be of a high enough social status to woo the young beauty. Under the guidance of Miss Havisham, Estella remains a flawless object of desire that is always just out of Pip's reach, forcing him go to further lengths to try and attain her; literally translated, Estella means 'star', which is exactly the role she plays in Pip's life. Having fallen in love with her (or forced into love with her by Miss Havisham, depending on the reading of the text), Pip spends all his time obsessing about her despite her never having brought any real happiness to his life, stating "I never had one hour's happiness in her society, and yet my mind all round the four-and-twenty hours was harping on the happiness of having her with me unto death". The turning point on Pip's ambitious journey to become a gentleman is the arrival of Jaggers, the commanding and foreboding lawyer from London who arrives entirely unexpectedly to inform Pip that a ...read more.

Out of fear, Pip brings Magwitch some tools from Joe's workshop for him to free himself from his shackles, and even though Pip's act of kindness was done because of the terror he held for Magwitch, this one deed leaves a deep impression upon the criminal, and greatly influences his actions towards Pip later. When it is finally revealed that he in fact was the one who allowed Pip his life of prosperity, he is forced to question his existence as a gentleman if it was only possible through the actions of a murderer (reformed or otherwise). It is at this point that Pip is able to finally overcome his desire to prosper as a gentleman and rely on his inner kindness which he has suppressed for so long. When Magwitch is arrested, he sees "in the hunted, wounded, shackled creature... only a man who had meant to be my benefactor, and who had felt affectionately, gratefully and generously towards me with great consistency through a series of years. I only saw in him a much better man than I had been to Joe." With no thought put to his 'proper place', he takes it upon himself to care for Magwitch throughout his trial and until his death, even though all his riches are relinquished to the Crown. Following this though, Pip finds himself suffering from a serious illness, and in turn, Joe takes it as his responsibility to nurse him back to health, despite the horrible manner in which Pip treated him since leaving for London. Pip thanks him for this, resolving the divide between them, overcoming his social biases and finally maturing into a real gentleman. ...read more.