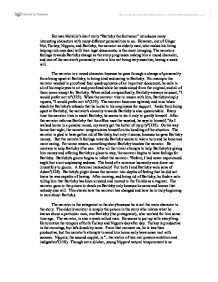 Herman Melville's short story &quot;Bartleby the Scrivener&quot; introduces many interesting characters with many different personalities to us.

Herman Melville's short story "Bartleby the Scrivener" introduces many interesting characters with many different personalities to us. However, out of Ginger Nut, Turkey, Nippers, and Bartleby, the narrator an elderly man, who makes his living helping rich men deal with their legal documents, is the most intruging. The narrators feelings towards Bartleby change as the story progresses making him a round character, and one of the narrator's personalty traits is him not being very assertive, having a weak will. The narrator is a round character because he goes through a change of personality from being upset at Bartleby, to being kind and caring to Bartleby. For example the narrator needed to proofread four quadruplicates of an important document, he calls in all of his employees to sit and proofread while he reads aloud from the original, and all of them come except for Bartleby. When called on specifically, Bartleby answers as usual, "I would prefer not to"(123). When the narrator tries to reason with him, Bartleby simply repeats, "I would prefer not to"(123). The narrator becomes agitated, and is so taken aback by Bartleby's refusals that he looks to his employees for support. ...read more.

A fraternal melancholy! For both I and Bartleby were sons of Adam"(128). Bartleby's plight draws the narrator into depths of feeling that he did not know he was capable of having. After moving, and being rid of Bartleby, he finds a note telling him that Bartleby has been arrested and moved to the Tombs as a vagrant. The narrator goes to the prison to check on Bartleby only because he cares and knows that nobody else will. This shows how the narrator has changed and how he is truly beginning to care about Bartleby. The narrator is the antagonist in the story because he is not the main character in the story. The elderly narrator is simply the person in the story who relates what he knows about a particular man, one Bartleby (the protagonist), who worked for him some time ago. The narrator, is also a weak willed man. He seems to put up with everything. He tolerates the tempers of both Turkey and Nippers day after day. Turkey is productive in the mornings, but he's drunk by noon. ...read more.

Also, when the narrator asks Bartleby to do something, Bartleby simply replies that he, "would prefer not to." Bartleby does whatever he feels like doing. The narrator allows this behavior, and just calls upon Turkey or Nippers to do the work. Other times the narrator would ask his other employees for advice, but does nothing to discipline Bartleby. Later, Bartleby quit working altogether. The narrator allows this and Bartleby ends up just living in the office. By not asserting himself, the narrator allows his employees to get drunk in the work place and allows Bartleby to decided whenever he wants to work. In conclusion, the narrator feelings towards Bartleby changes as the story progresses. He begins to help Bartleby by giving him money and offering Bartleby a place to stay. He also visits Bartleby in prison when he hears about the news. The narrator is also a weak willed man that does not do anything with Turkey's drinking problem and Nippers irritability, even though he does acknowledge that they are "valuable" several times, he does not to exercise his right as their employer to ensure that they behave in a manner suitable for his business. The narrartor also allows Bartleby to get away with not doing his work. ...read more.