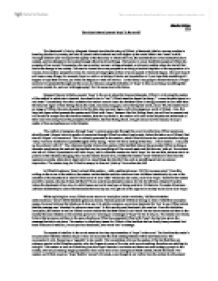 How does Atwood present 'hope' in the novel 'The Handmaid's Tale'?

Mandip Dhillon 12N How does Atwood present 'hope' in the novel? The Handmaid's Tale, by Margaret Atwood describes the story of Offred, a Handmaid, that is a woman ascribed a breeding function by society, and who is placed with a husband and wife higher up the social ladder who "need" a child. Through Offred's eyes we explore the rigidity of the theocracy in which she lives, the contradictions in the society they have created, and her attempts to find solace through otherwise trivial things. The heroine is never identified except as Offred, the property of her current Commander, she was a modern woman: college-educated, a wife and a mother when she lost all that due to the change in her society. Tale can be viewed from one perspective as being a feminist depiction of the suppression of a woman, from another perspective it can be viewed as being highly critical of some aspects of feminist dogma. the word hope it self means many things, for example; hope is a wish or a feeling of desire and expectation or if you hope that something will happen or hope that it is true, you want it to happen or want it to be true. In this essay I am going to discuss the topic of 'hope' and how it is presented through out the novel, by Atwood, using the definition of 'hope' in this novel being 'something that you have waited for, and are 'wishing/praying' for it to come true in the future. ...read more.

Whist exploring her room, Offred comes across an inscription inside a wardrobe, 'Nolite te bastardes carborundorum.' (Don't let the bastards grind you down). Atwood presents Offred as having no idea of what this inscription means, however believes that what ever it does say, it is said by someone- a previous handmaid for 'her' to see. Offred claims that the message was 'intended for whoever came next.' In this case the next handmaid, this was her. From this forbidden inscription, the readers as well as Offred come to realise the fact that Offred is not 'alone' she too has someone out there in the exactly the same situation as her and has given her a warning or a message of 'hope' for her to rely on. The readers now firmly believe that someone out there in the same situation as Offred has presented Offred with 'hope' she has been given the message that she's not alone. The readers in effect feel pleased for Offred of the fact that she has finally been presented first hand evidence of rebellion, from a previous handmaid, who wrote 'her' a message. The aspect of rebellion in the novel seems to be a key representation of 'hope' in the novel. The first time the reader's are presented with this rebellion-hope is when we encounter the first meeting between Offred and Serena Joy- the commander's wife. ...read more.

This is a method of presenting 'hope' by Atwood, because it shows Offred that there are still some independent states out there, that may be fighting against this regime and that one day they will come to her amongst other citizens rescue and get them out of Gilead. Therefore 'oranges' symbolise 'hope.' Overall I have come to a conclusion, that Offred the handmaid, believe that one day she will be free from the Gileadian regime and that one day she will be rescued by her prince, who will take her away from all the trouble that she is facing. Margaret Atwood has used many ways in which the novel presents 'hope' to both Offred and the readers through, flashbacks of the past, characters that are rebelling- Serena Joy, Nick, Moira and the previous unknown handmaid, and possessions such as oranges. Offred never seems to lose 'hope' and if she does she has a flash back of her past, which causes her to yearn for the past and want things to be the way they were before the Gilead regime took over and snatched her away from her family and deprived her of the one thing that she had, which was love and affection. All Offred is left with is 'hope.' Hope for a better future, hope of a method to escape, hope to find her family and hope that one day things will be back to normal so that she can... ' Pick up from' where she left from. ...read more.