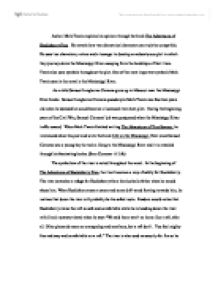 The river served as a refuge for Huckleberry from his alcoholic father when he would abuse him. When Huckleberry sees a canoe and some drift wood floating towards him, he realizes that down the river will probably be his safest route. Readers would notice that Huckleberry views the raft as safe and comfortable while he is heading down the river with Jim (a runaway slave) when he says "We said there wan't no home like a raft, after all. Other places do seem so cramped up and smothery, but a raft don't. You feel mighty free and easy and comfortable on a raft." The river is also used as security for Jim so he will not worry about how he will be sold to a man in New Orleans in risk of being split from his only wife and children forever. ...read more.

As Huckleberry is tearing his letter to Aunt Polly he says to himself " All right then I'll go to h**l." This quote shows maturity by Huck making an adult decision and doing what he feels is right by not telling of how he knows where a runaway slave is located. Thus, while on a courageous journey to save a new friend Huckleberry gains more than he bargained for. He gains a sense of responsibility. In The Adventures of Huckleberry Finn, the river was used for a journey and as an escape. Understanding the symbolism of the Mississippi River helps the reader to realize the important role the river played in the novel and the important role the river has played in people's lives. The symbolic river helps the reader to better understand the characters and appreciate the author's perspective. ...read more.