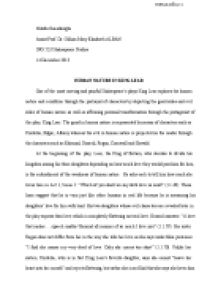 ï»¿ESENLILIOÄLU Nilüfer EsenlilioÄlu Assist.Prof. Dr. Gillian Mary Elizabeth ALBAN ING 523 Shakespeare Studies 14 December 2013 HUMAN NATURE IN KING LEAR One of the most moving and painful Shakespeare’s plays King Lear explores the human nature and condition through the portrayal of characters by depicting the good sides and evil sides of human nature as well as affirming personal transformation through the protagonist of the play, King Lear. The good in human nature is represented by means of characters such as Cordelia, Edgar, Albany whereas the evil in human nature is projected on the reader through the characters such as Edmund, Goneril, Regan, Cornwall and Oswald. At the beginning of the play, Lear, the King of Britain, who decides to divide his kingdom among his three daughters depending on how much love they would proclaim for him, is the embodiment of the weakness of human nature. He asks each to tell him how much she loves him in Act I, Scene I: “Which of you shall we say doth love us most? ...read more.

In this scene, the weakness of human nature is portrayed as Lear gives importance to show off and flattery more than real love which is his tragic flaw in the play. Another significant relevancy of the play to the human nature is the subplot of Edmund?s betrayal of his father and brother. His betrayal of his father and his plans about his brother bring to light just how evil his character is; however, at the beginning of the play we see that he is not ultimately driven by his ambition for power or wealth, but instead his principal goal is to be respected and accepted by society as he says ?Now gods, stand up for bastards? (1.2.22) because he is even mocked and insulted by his father for being illegitimate and is deprived of his father?s love. At the close of the play, his weakness is recognized no matter how evil he is. Wounded in combat by his brother, Edgar and about to die, he whispers ?Yet Edmund was beloved? (5.3.238). ...read more.

We see that he becomes humanistic and sympathetic when he puts himself into poor people?s shoes: ?expose thyself to feel what they feel? (3.4.35). As a result of this transformation, he now sees and understands everything clearly as he says about his two daughters: ?They flattered me like a dıg ? To say ?aye? and ?no? to everything I said!?(4.6.95-98). When he finally meets Cordelia, he admits that ?he is a very foolish old man? (4.7.76). It seems that even if you are a king, it is in human?s nature to make mistakes. In a nutshell, in King Lear, we see that Shakespeare has developed the characters so meticulously that they are like mirrors reflecting the realities relevant to human nature and transformation. Cordelia, who has never lost her innocence throughout the play as she forgives her father even if he disowns her, symbolizes the good sides of humankind. Edmund who desperately needs to be recognized by society proves the utter evil in his character. King Lear, who makes mistakes in the beginning, but then learns from his mistakes, has gone through a personal transformation. ...read more.