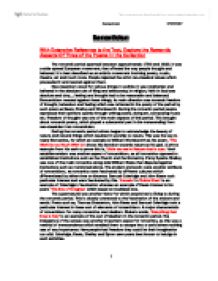 I will explore the romantic aspects in William Wordsworth's poems 'The Daffodils,' Percy Shelley's poem 'Ozymandias' and William Blake's poem 'The Tyger.'The poem 'Daffodils' contains various characteristics that would classify it as a romantic poem

Romanticism With Extensive Reference to the Text, Explore the Romantic Aspects Of Three of the Poems in the Collection The romantic period spanned between approximately 1780 and 1820. It was a wide spread European movement, that affected the way people thought and behaved. It is best described as an artistic movement involving poetry, music, theatre, art and much more. People rejected the strict neo-classical values which preceeded it and reacted against them. Neo-classicism stood for various things: in politics it was totalitarian and believed in the absolute rule of King and aristocracy; in religion, faith in God was absolute and cinq...; feeling and thought had to be reasonable and balanced. Romanticism reacted against these things, its main direction was towards freedom of thought, behaviour and feeling which was reflected in the poetry of the period by such poets as Keats, Shelley and Wordsworth. During the romantic period people expressed their opinions openly through writing poetry, doing art, composing music etc. Freedom of thought was one of the main aspects of this period. This brought about romantic poetry, which played a substantial part in the transcending from neo-classicism into romanticism. During the romantic period writers began to acknowledge the beauty of nature and natural things which resulted in worship to nature. This was the key to many Romantics, for which an example is William Wordsworth as his poem, 'The World is too Much With Us' shows his devotion towards nature as his god. ...read more.

A very effective strategy employed by Wordsworth is that he uses personification, which is in actual fact his imagination. He describes their movements and compares them to humans and also gives them human qualities, 'dancing in the breeze... tossing their heads in sprightly dance.' Wordsworth portrays his emotions and describes his mood as he shows how happy he is when he sees the daffodils and when he is amidst the beauty of nature. 'A poet could not but be gay.' Finally to finish of the poem Wordsworth uses his memories to remember an occasion when he was very happy, 'For oft, when on my couch I lie, in vacant or in pensive mood... and then my heart with pleasure fills and dances with the daffodils.' The poem 'Ozymandias' gives us the picture of an egoistical and powerful ruler. Pride is one of the main themes in the poem. The first three lines of the poem tell us about the setting of the poem. The word 'antique' in the first line suggests that it is old and valuable. As the poem goes on, it talks about 'vast' legs which indicate that the man who built them must have been powerful and had the money to build the statue. In the following three lines Shelley only reveals the lips of the statue. He doesn't mention anything about other facial parts to describe Ozymandias. ...read more.

The questions that follow are rhetorical because no answer is provided and are posed to the tiger. For example, the answer to the first question 'What immortal eye or hand' leads us imagine that the creator of this animal must be someone or something powerful such as; God. Blake questions about the fire in the tiger's eyes, 'Burnt the fire of thine eyes?' Then he says 'What the hand, dare seize the fire?' which indicates that someone daring has stolen the fire and put it in the tiger's eyes. The poet is astounded by the tiger's characteristics, 'In what furnace was thy brain?' The poem ends with the same question it began with, but with a slight difference, as the verb 'could' has changed to 'dare' making the poem more dynamic. The poem is not about the tiger, but about the 'Tyger' in the view of an onlooker. Blake imagines the tiger to be a part of God's power in creation. All three of these poems are very romantic and are effective in conveying a message. The poems provide an atmosphere where people are free to do as they please without any fear, and are not bound as they were during the neo-classical period. The romantic period was a dynamic change in society and has affected the present, as we have benefited from this movement in various ways. Poets such as William Blake, Percy Shelley, William Wordsworth etc, have changed our lives significantly through their poems and literature. ?? ?? ?? ?? Romanticism 07/05/2007 1 ...read more.