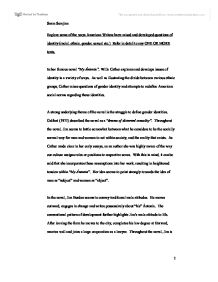 In her famous novel My ntonia, Willa Cather explores and develops issues of identity in a variety of ways. As well as illustrating the divide between various ethnic groups, Cather raises questions of gender identity and attempts to redefine Ameri

Explore some of the ways American Writers have raised and developed questions of identity (racial, ethnic, gender, s****l etc.) Refer in detail to any ONE OR MORE texts. In her famous novel "My �ntonia", Willa Cather explores and develops issues of identity in a variety of ways. As well as illustrating the divide between various ethnic groups, Cather raises questions of gender identity and attempts to redefine American social norms regarding these identities. A strong underlying theme of the novel is the struggle to define gender identities. Gelfant (1971) described the novel as a "drama of distorted sexuality". Throughout the novel, Jim seems to battle somewhat between what he considers to be the socially normal way for men and women to act within society, and the reality that exists. As Cather made clear in her early essays, as an author she was highly aware of the way our culture assigns roles or positions to respective sexes. With this in mind, it can be said that she incorporates these assumptions into her work, resulting in heightened tension within "My �ntonia". Her idea seems to point strongly towards the idea of men as "subject" and women as "object". In the novel, Jim Burden seems to convey traditional male attitudes. ...read more.

Her pride at being able to work in the fields is something that both threatens and terrifies Jim, and so the episode with the snake helps to restrain �ntonia's pride and restore the order. Yet shortly reinstating Jim's masculinity through the incident with the snake, Cather takes an about turn on her supposedly conventional stance regarding gender identity. Later on in the chapter, we find out that the snake, in spite of its size and grotesqueness, was in fact old and "without much fight in him" (34). Jim concedes that perhaps he was slightly lucky in his victory over the snake (34) and as such, his apparent heroism is undermined and he is once again on a par with �ntonia. Later on in the novel, Cather again seeks to blur the lines between genders. When Jim spends the night at Wick Cutter's house in place of �ntonia as a means of protecting her, the result is something akin to a bed-trick. It is made clear in the novel the type of actions that Wick is known to take on his hired girls, yet Jim is startled when he finds Cutter's hands on him. However, after enduring a beating from Cutter, it is Jim's reaction to the whole situation that is somewhat surprising. ...read more.

To conclude, it is clear not only from Cather's essays, but from her novel "My �ntonia", that she had a great understanding of how culture assigns particular identities to genders within society. By creating a strong female character that refuses to conform to society's rules regarding identity, Cather seeks to break down longstanding ideals. From the start of the novel, Jim constantly seeks to impress his masculinity upon �ntonia, namely the instance with the snake and later the episode with Cutter. He sees himself as a mythical type hero, whose mission is to protect and envelop �ntonia, so that he might mould her into his ideal woman. While Jim plays the role of "subject", �ntonia is seen to him as the "object". But almost comically, Cather stops him in his stride and brings Jim and his masculine attitudes back to earth. After killing the snake, he realises it was old and that he might have been fortunate in his triumph. In trying to protect �ntonia from Cutter, he ends up being ruthlessly beaten. His identity fades over the course of the novel as he follows the conventional male pattern of development. Contrastingly, �ntonia flourishes as she ignores the male influences on her and creates her own life and family, of which she forms the centre. Even the narrative structure changes to reflect the idea that Jim is fading from �ntonia's life - he is unable to force his ideals upon her. ...read more.