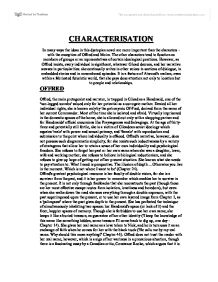 In many ways the ideas in this dystopian novel are more important than the characters - with the exception of Offred and Moira. The other characters tend to function as members of groups or as representatives of certain ideological positions.

CHARACTERISATION In many ways the ideas in this dystopian novel are more important than the characters - with the exception of Offred and Moira. The other characters tend to function as members of groups or as representatives of certain ideological positions. However, as Offred insists, every individual is significant, whatever Gilead decrees, and her narrative weaves in particularities: she continually writes in other voices in sections of dialogue, in embedded stories and in remembered episodes. It is a feature of Atwood's realism, even within a fabricated futuristic world, that she pays dose attention not only to location but to people and relationships. OFFRED Offred, the main protagonist and narrator, is trapped in Gilead as a Handmaid, one of the 'two-legged wombs' valued only for her potential as a surrogate mother. Denied all her individual rights, she is known only by the patronymic Of-Fred, derived from the name of her current Commander. Most of the time she is isolated and afraid. Virtually imprisoned in the domestic spaces of the home, she is allowed out only with a shopping partner and for Handmaids' official excursions like Prayvaganzas and Salvagings. At the age of thirty-three and potentially still fertile, she is a victim of Gileadean s****t ideology which equates 'male' with power and s****l potency, and 'female' with reproduction and submission to the point where individuality is effaced. Offred's narrative, however, does not possess such diagrammatic simplicity, for she resists such reductiveness by a variety of stratagems that allow her to retain a sense of her own individuality and psychological freedom. She refuses to forget her past or her own name when she was a daughter, lover, wife and working mother; she refuses to believe in biological reductionism; and she refuses to give up hope of getting out of her present situation. She knows what she needs to pay attention to: What I need is perspective. ...read more.

Sometimes I think she knows' (Chapter 26). Actually, she does not know until she finds the purple costume and the lipstick on her cloak. It is a clich6-like situation, but Serena's own pain of loss goes beyond this conventional pattern: ... Behind my back," she says. "You could have left me something."' Offred wonders, 'Does she love him, after all?' (Chapter 45). Serena is still there in her house, standing anxiously beside the Commander at the end as Offred is led out through the door. Her farewell to Offred is wifely in an old-fashioned sense which has none of the pieties of Gilead: ... b***h," she says. "After all he did for you (Chapter 46). THE OTHER COMMANDERS' WIVES These merely exist as a gaggle of gossips in blue, for Offred knows nothing of their lives apart from overhearing snatches of their conversation at Birth Days, Prayvaganzas or social visits, when they make scandalous comments about their Handmaids. Only the Wife of Warren achieves a moment of grotesque individuality when she is seen sitting on the Birth Stool behind Janine, 'wearing white cotton socks, and bedroom slippers, blue ones made of fuzzy material, like toilet-seat covers' (Chapter 21). There is also one other unfortunate Wife who is hanged at the Salvaging, but Offred does not know what her crime was. Was it murder? Was it adultery? 'It could always be that. Or attempted escape' (Chapter 42). THE AUNTS Like the Wives, the Marthas, the Econowives and most of the Handmaids, these are presented as members of a class or group, every group representing a different female role within Gilead. With their names derived from preGileadean women's products, the Aunts are the older women who act as female collaborators on the orders of the patriarchy to train and police Handmaids. They are a paramilitary organisation, as is signified by their khaki uniforms and their cattle prods, and, as propagandists of the regime, they tell distorted tales of women's lives in the pre-Gileadean past. ...read more.

He is a figure whose life story stopped for Offred at a traumatic point in the past: 'Stopped dead in time, in mid-air, among the trees back there, in the act of falling' (Chapter 35). Through her reconstruction Luke appears as a late twentieth-century 'liberated man', full of courage and humour and remembered by Offred entirely in his domestic relations with her. He is an older man who has been married before, so that there is an ironic parallel drawn between him and the Commander. Offred remembers their affair when she goes with the Commander to Jezebel's, for it is the hotel where she and Luke used to go (Chapter 37). She retains the memory of a strong loving partner, and her detailed recollections are of Luke cooking and joking with her mother, of lying in bed with her before their daughter was born, of collecting their daughter from school. We never know what Luke's job was, but Offred recalls his supportive behaviour when she lost her job at the time of the Gileadean take-over and her resentment against him for being a man (Chapter 28). Luke figures insistently in Offred's recurring nightmare of their failed escape attempt, not only in that final image of him lying shot face down in the snow, but also in her recollections of his careful preparations and his coolly courageous attempt to take his family to freedom over the Canadian border. His afterlife in the novel is very much the result of Offred's anxieties about what might have happened to him. Is he dead, or in prison? Did he escape? Will he send her a message and help her to escape back into their old family life? 'It's this message, which may never arrive, that keeps me alive. I believe in the message' (Chapter 18). It is also her hope of this message which keeps the image of Luke alive. The anxieties we may feel for his fate are projections of Offred's own. * ...read more.