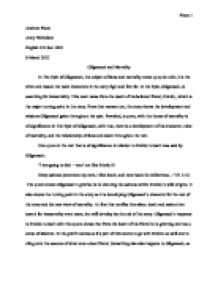 In the Epic, Gilgamesh, is searching for immortality. This want came from the death of his beloved friend, Enkidu, which is the major turning point in the story.

Andrew Pham Andy Nicholson English 231 Sec 1025 8 March 2012 Gilgamesh and Mortality In The Epic of Gilgamesh, the subject of fame and mortality come up quite a bit, it is the drive and reason the main characters in the story fight and live for. In the Epic, Gilgamesh, is searching for immortality. This want came from the death of his beloved friend, Enkidu, which is the major turning point in the story. From that moment on, the story shows the development and wisdom Gilgamesh gains throughout the epic. Provided, a quote, with the theme of mortality is of significance in The Epic of Gilgamesh, with that, there is a development of his character, view of mortality, and the relationship of fame and death throughout the text. One quote in the text that is of significance in relation to Enkidu's death was said by Gilgamesh: "I am going to die! -am I not like Enkidu?! Deep sadness penetrates my core, I fear death, and now roam the wilderness-" (9. 2-4.) The quote shows Gilgamesh's grief as he is shouting his sadness within Enkidu's wild origins. It also shows the turning point in the story as it is developing Gilgamesh's character for the rest of the story and his new view of mortality. ...read more.

The two respective views on mortality are quite the opposite in the story. Gilgamesh does not have an understanding of the soul as a separate entity he believes that he will be nothing more than a corpse after his death. Until he loses his best friend, Enkidu, he becomes very worried because he realizes that everyone will die at sometime. As for Enkidu's view of life and death, is quite the opposite mindset of Gilgamesh. Enkidu is innocent of his power, mortality and potential for abusive authority over living creatures. Together, they embody the answers to the unknown during their quest for the purpose and significance of life and death. At the beginning of the epic, Gilgamesh is seen as the refined, civilized all-powerful ruler of his kingdom and people. His position automatically suggests the possibility for his eventual abuse of his own power. Though Gilgamesh is part God and part human, he is nonetheless mortal, and struggles with the concept of his inevitable fate. His arrogance stands out to the Gods as a good reason to create Enkidu, a counter and rival to Gilgamesh. Perhaps the basic fear of dying is what drives Gilgamesh to run from the same demise Enkidu had to suffer. Gilgamesh works himself to peaked exhaustion to come to the understanding that death is to be welcomed. Unlike Enkidu, Gilgamesh is burdened with the fear of death. ...read more.

Enkidu's predominant ignorance of death saves him from a lifetime of question and gives the plot a counter part to the very human reaction Gilgamesh has toward the mystery of death and the yearning desire for immortality. There are a few morals in this ancient tale, that ideals of Uruk at the time was not to worry about your afterlife, but to focus on the time with your family and friends. The focus is on the present and the road to immortality is in the memories of your friends and loved ones. Gilgamesh ends up dying, like all men must do. He also learned that there is no immortal life for men and that the only true way for immortality would be achieved would be through fame and glory for his stories to be told for future generations, his legacy would never die until the story were to never be told again. The quote chosen was of significance to the overall theme of the epic of mortality since it shows the turning point in The Epic of Gilgamesh. Through all of the transitions, we see Gilgamesh's attitude toward life change. The goals he has for his own life alter dramatically, and it is in these goals that we see Gilgamesh's transition from being a shallow, ruthless ruler to being an subjective, content man. Citation Damrosch, David, and David L. Pike. The Ancient World And The Medieval Era. 1. Boston: Pearson Learning Solutions, 2011. Pham 1 Pham 1 ...read more.