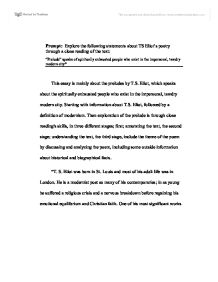 (a) Prelude speaks of spiritually exhausted people who exist in the impersonal, tawdry modern city

Prompt: Explore the following statements about TS Eliot's poetry through a close reading of the text: "Prelude" speaks of spiritually exhausted people who exist in the impersonal, tawdry modern city* This essay is mainly about the preludes by T.S. Eliot, which speaks about the spiritually exhausted people who exist in the impersonal, tawdry modern city. Starting with information about T.S. Eliot, followed by a definition of modernism. Then exploration of the prelude is through close reading's skills, in three different stages; first; annotating the text, the second stage; understanding the text, the third stage, include the theme of the poem by discussing and analyzing the poem, including some outside information about historical and biographical facts. "T. S. Eliot was born in St. Louis and most of his adult life was in London. He is a modernist poet as many of his contemporaries; in as young he suffered a religious crisis and a nervous breakdown before regaining his emotional equilibrium and Christian faith. One of his most significant works is the preludes, which deal with spiritually exhausted people who exist in the impersonal, tawdry modern city."1 "Characteristics of Modernism, Open Form, Free verse, Discontinuous narrative, Juxtaposition, Classical allusions, Borrowings from other cultures and languages, Unconventional use of metaphor, Fragmentation, Multiple narrative points of view"2 "'Preludes' is a poem by T. ...read more.

the appearance of the woman of her soul, as Eliot tours inside her inner conflict about her needs and her wants, and the methods she complies to fight her poverty in order to survive. 'The thousand sordid images Of which your soul was constituted; They flickered against the ceiling.' The sins, the dirty deeds, all like flames reaching the ceiling as the fire eats her inside out. 'light crept up' the light in all the preludes is obscured as the dawn start on raising showing that all body parts mentioned are being soiled; yellow feet, soiled soul, and the hands, also the light announces the ending of the night, where the woman soul was soiled through, which is a glimpse of hope, but rapidly Eliot says 'you curled the papers from your hair' does that mean, she is getting ready for the following night? If so, then the hope is gone again. When Eliot uses parts of body he limits the description and de-personalizes it, in order to give the reader the freedom to feel the reality of the poem by linking it to reader's actual life. The forth and last prelude is timed afternoon 'That fade behind a city block,' and more people went out in the city's street or blocks. ...read more.

The continuing's' repletion also becomes an example of onomatopoeia when it captures the scraping sound of the blown leaves as they scrape the ground. Sibilance also conveys the mood of the impatient cab horse more vividly. Sibilance reinforces the atmosphere of dirty secret lives." 6 The rhyme in this poem does not have a clear pattern, which directly point out the confusion, uncertainty and doubtfulness of life, as an evidence of that prelude III contains 14 different ending, on the other hand there are words repeated such as 'street' in lines 32 and 33. "All the sound repetitions create verbal or word music, which is very suitable for a group of poems called 'Preludes'"7. In summary, Prelude speaks of spiritually exhausted people who exist in the impersonal, tawdry modern city, in my personal opinion this is true. In the modernism era, literature was not so fond of the beauty as in Romanticism, in that era people suffered of war and changes occurred especially the industrialization which was a great revolution as a human development but the worst set back toward the poor class, which means more poverty and misery to this class, also the Spiritual Decadence was elaborated in details in the preludes. 1 http://www.wsu.edu:8080/~wldciv/world_civ_reader/world_civ_reader_2/eliot_preludes.html 2 http://en.wikipedia.org/wiki/Modernist_literature#Formal_characteristics 3 http://en.wikipedia.org/wiki/Preludes_(poem) 4 http://www.ciao.co.uk/Essays__Review_5302273 5 http://www.skoool.ie/skoool/examcentre_sc.asp?id=3033 6 http://www.skoool.ie/skoool/examcentre_sc.asp?id=3033 7 http://www.skoool.ie/skoool/examcentre_sc.asp?id=3033 ?? ?? ?? ?? ...read more.