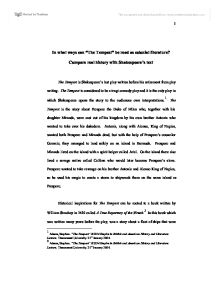 In what ways can &quot;The Tempest&quot; be read as colonial literature? Compare real history with Shakespeare's text.

In what ways can "The Tempest" be read as colonial literature? Compare real history with Shakespeare's text The Tempest is Shakespeare's last play written before his retirement from play writing. The Tempest is considered to be a tragi-comedy play and it is the only play in which Shakespeare opens the story to the audiences own interpretations.1 The Tempest is the story about Prospero the Duke of Milan who, together with his daughter Miranda, were cast out of his kingdom by his own brother Antonia who wanted to take over his dukedom. Antonia, along with Alonso, King of Naples, wanted both Prospero and Miranda dead, but with the help of Prospero's councilor Gonzalo, they managed to land safely on an island in Bermuda. Prospero and Miranda lived on the island with a spirit helper called Ariel. On the island there also lived a savage native called Caliban who would later become Prospero's slave. Prospero wanted to take revenge on his brother Antonio and Alonso King of Naples, so he used his magic to create a storm to shipwreck them on the same island as Prospero. Historical inspirations for The Tempest can be rooted to a book written by William Strachey in 1610 called A True Reportory of the Wrack.2 In this book which was written many years before the play, was a story about a fleet of ships that were separated during a storm; the ships were sent by the Virginia Company on a voyage to Virginia. ...read more.

The settlers also assumed that as the natives looked different and lived differently compared to the Europeans, they must be savage and uncivilized and must be taught the English language and its customs for the settlers were more superior and civilized. The way Prospero claimed the island to be his even though Caliban had been living there before Prospero had landed on the island represents the attitude of the European settlers taking land from natives. Caliban, like the native people, would realized later that he had been taken advantage of. In Act I Scene 2, Caliban talks of his land: "This island's mine by Sycorax my mother, Which thou tak'st from me. When thou cam'st first Thou strok'st me and made much of me; wouldst give me... For I am all the subjects that you have, Which first was mine own king; and here you sty me In this hard work, whiles you do keep from me The rest 'th'island" (I, ii, 332-344) The way Caliban talked of his land represents the native Indians speaking of how their land got stolen by the European settlers. It can be seen that Shakespeare himself suggests to the readers the facts that the settlers indeed did take away the land from the natives just as how Prospero took it from Caliban. Prospero regarded and treated Caliban as a lesser being because of how Caliban looked. ...read more.

(III, ii, 130-138) Shakespeare suggests that even though Caliban was ugly and appeared different and uncivilized, he was able to feel and appreciate the beauty of nature; it shows that Caliban had human feelings. In relation to the native Indians in the New World, even though they acted, looked, lived differently and were considered savages and uncivilized than the European settlers, they were in fact still humans and were capable of feeling. They were not wild creatures. It was probably just that different people of different cultures lead a different lifestyles; but since the early European settlers were not open to this sort of understanding and were used to their own way of life, they regarded anything else that was different as uncivilized. All in all, there are numerous ways to which The Tempest can be read as colonial literature as mentioned in the relationship of each character to actual events in history and the interaction of settlers and the natives. One way of reading The Tempest as colonial literature is as a way of telling the audience that regardless of what people may look or live like, we should always keep an open mind and respect their customs and traditions in spite of how uncivilized it may look for they are also humans and are capable of feeling and appreciating the beautiful things in life whatever it may be; treat others how you want to be treated. ...read more.