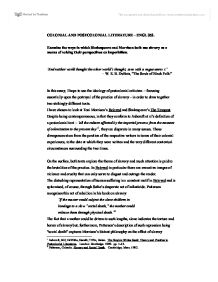 Examine the ways in which Shakespeare and Morrison both use slavery as a means of voicing their perspectives on imperialism.

COLONIAL AND POSTCOLONIAL LITERATURE - ENGL 353. Examine the ways in which Shakespeare and Morrison both use slavery as a means of voicing their perspectives on imperialism. 'And neither world thought the other world's thought, save with a vague unrest.' - W. E. B. DuBois, "The Souls of Black Folk." In this essay, I hope to use the ideology of postcolonial criticism - focusing essentially upon the portrayal of the practice of slavery - in order to draw together two strikingly different texts. I have chosen to look at Toni Morrison's Beloved and Shakespeare's The Tempest. Despite being contemporaneous, in that they conform to Ashcroft et al's definition of a postcolonial text - 'all the culture affected by the imperial process from the moment of colonization to the present day'1, they are disparate in many senses. These divergences stem from the position of the respective writers in terms of their colonial experiences, to the date at which they were written and the very different contextual circumstances surrounding the two times. On the surface, both texts explore the theme of slavery and much attention is paid to the brutalities of the practice. In Beloved in particular there are evocative images of violence and cruelty that can only serve to disgust and outrage the reader. The disturbing representation of human suffering is a constant motif in Beloved and is epitomised, of course, through Sethe's desperate act of infanticide. Patterson recognises this act of rebellion in his book on slavery: 'If the master could subject the slave children in bondage to a slow "social death," the mother could release them through physical death.'2 The fact that a mother could be driven to such lengths, alone indicates the torture and horror of slavery but, furthermore, Patterson's description of such repression being "social death" captures Morrison's blatant philosophy on the effect of slavery stemming from imperialist practice. The violence narrated by Morrison is disturbing throughout the piece and is epitomised in the confirmation that schoolteacher roasted Sixo alive. ...read more.

It is unquestionable that he has attempted to 'violate / The honour' of Miranda and when he replies to Prospero's accusation with no remorse: 'Thou didst prevent me; I had peopled else The isle with Calibans.' (I.ii.352-3) - his crude and depraved nature prevails. Shakespeare effectively prevents the audience from feeling any sympathy for Caliban at this stage and, as such, this insinuates that Said's theory is true and Shakespeare sees Caliban - and thus slaves - as lesser beings. Indeed, it could be suggested that Shakespeare saw colonised people, epitomised through the character of Caliban, as 'the other'- 'that which is unfamiliar and extraneous to a dominant subjectivity, the opposite or negative against which an authority is defined.'7 Shakespeare is, therefore, deliberately juxtaposing Caliban's 'otherness' and lack of civility with the refinement of the Europeans that arrive on the island. If, of course, this is the case, then Shakespeare appears to be using the system of slavery as a means of enforcing his belief in the acceptability of imperialism. In absolute comparison, however, Morrison presents the colonial discourse from the perspective of the black slaves - derived from her very roots and thus stands at the opposite end of Said's theory to Shakespeare. We are compelled, quite rightly, to see the suppressed characters in the novel as human beings. When we hear Paul D talk about Halle, who was helpless to protect his family, he defends him saying: 'A man ain't a goddamn ax. Chopping, hacking busting every goddamn minute of the day. Things get to him. Things he can't chop down because they're inside.' The tree imagery employed by Paul D gives a profound sense of the absolute lack of control felt by the slaves. They were helpless to stop the tree of frustration and anguish from forming inside them. Furthermore, we can see that Halle's fundamental role as the man of the family has been stolen away from him - not only has he lost his independence, but he has been deprived of his masculinity. ...read more.

Therefore, it is certainly more appealing to suggest that Shakespeare created the mythical island, complete with the native Caliban, as a forum in which to dramatise discussions of the period. Conclusively, it would appear that suggesting that Shakespeare created Caliban merely as tool to voice his prejudice and insular views is far too simplistic an analysis of his position. This estimation is also seemingly unjust, since the 'free and open' (I.iii.398) hero in Othello is the black moor, of course. Shakespeare's recurrent use of characters, which would be classed as 'the other' in postcolonial theory, suggests a deep fascination with the contextual issues of the day. Within The Tempest, the mutual fascination that Caliban and Prospero originally had for one another is clear: Cal. 'When thou cam'st first, Though strok'st me, and made much of me ...and then I lov'd thee' (I.ii.333-8) - and this could be considered symbolic of Shakespeare's intrigue in the indigenous populations in the rising British colonies. Therefore, rather than deeming Shakespeare's creation of such an 'abhorred slave' as a reflection of his prejudices, it more obviously demonstrates his curiosity and interest in the 'brave new world'. To culminate the discussion, it is clear to see that a contemporary reader can derive much insight from postcolonial texts such as Beloved and The Tempest. Irrespective of the author's conscious literary objective, moral teachings regarding the impact of slavery and imperialism upon society are manifest from today's perspective. Furthermore, these ideas continue to be relevant in the world today, with prejudices and racial discrimination still in existence. Through providing the reader with such insight into slavery, whether on a realistic or mythological level, it can only be hoped that such education will expel the legacy of the imperialistic world and DuBois' consciousness of the misapprehension between races - 'neither world thought the other world's thought' - will be a complaint of the past. ...read more.