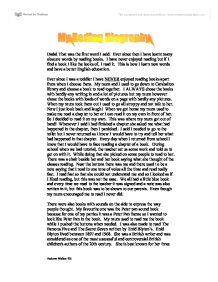 Dada! That was the first word I said. Ever since then I have learnt many obscure words by reading books. I have never enjoyed reading but if I find a book I like the looks of, I read it. This is how I learn new words and have a better English education. Ever since I was a toddler I have NEVER enjoyed reading books apart from when I choose them. My mum and I used to go down to Carshalton library and choose a book to read together. I ALWAYS chose the books with hardly any writing in and a lot of pictures but my mum however chose the books with loads of words on a page with hardly any pictures. When my mum took them out I used to go all stroppy and not talk to her. Now I just look back and laugh! When we got home my mum used to make me read a chapter to her or I can read it on my own in front of her. So I decided to read it on my own. This was where my mum got out of hand! Whenever I said I had finished a chapter she asked me what had happened in the chapter, then I panicked. I said I needed to go to the toilet but I never returned as I knew I would have to try and tell her what had happened in that chapter. ...read more.

The book is a bit long but the chapters are short so you can stop every now and then after each chapter. The author of the book was of course Roald Dahl and he lived from 1916-1990. He was a British writer of novels, short stories, and film scripts, but best known for his children's books. He was born in Llandaff, Wales, and educated at Repton, a boarding school for boys. His harsh treatment while a student there led him later to write stories about cruelty and revenge. He then deciding not to enter a university, Roald Dahl joined the Shell Oil Company in 1933, worked in Tanganyika from 1937 to 1939, enlisted in the Royal Air Force (RAF) at the start of World War II (1939-1945), and served as a fighter pilot and as an air attach� in Washington, D.C. During those years he published his RAF adventures in the Saturday Evening Post and wrote his first book, The Gremlins (1943), which became a motion picture in 1984. A collection of short stories, Someone Like You (1953), became a best-seller and was followed by Kiss, Kiss (1959), which firmly established Dahl as a serious writer of fiction. Switch b***h (1974), another work of adult fiction, continued Dahl's tradition of morbid, eerie tales for adults. Dahl was the author of 19 children's books, the best known of which were James and the Giant Peach (1961) ...read more.

Unfortunately for Michael he didn't have another chance to impress that season, as that was the final match. At the start of the 1997/98 season Michael was still in the Liverpool side, as Robbie Fowler was carrying an injury. Playing alongside the experienced Riedle, Michael again showed his natural talent, again scoring an equaliser against Wimbledon. With Fowler missing games through injury and suspension Michael was given plenty of chances in the first team, and in a Coca-Cola Cup tie against Grimsby he scored his first hat-trick. Michael is one of the most promising players in England and now has a regular first team place and is sure to be an Anfield's favourite for years come. Being an author as successful as J.K. Rowling must be exciting. J. Rowling wrote the Harry Potter books and they have become so popular in the world and there has recently been a movie made of the first book, The Philosopher's Stone. The film has already smashed box office expectations and is going to be a big hit around the world just like the books. I would like to be an author but as I don't read I wouldn't be very good because I have no imagination and I am very brief with my writing. My English has improved since I have been at Wilson's and hope it will carry on improving in the future. Andrew Walker 9H ...read more.